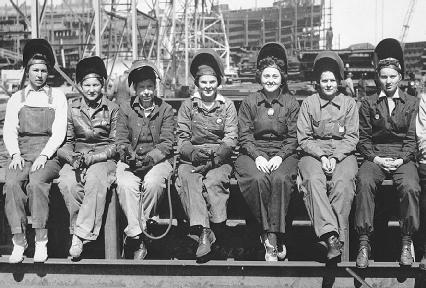 Women Welders pose for a photo in Pascagoula, Mississippi in 1943 (Courtesy National Archives and Records Administration)

By the late 1930s it had become increasingly clear that war was brewing in Europe.  Benito Mussolini had come to power in Italy in 1922, though he tended toward inflammatory and extreme rhetoric, he was taken less seriously than Adolph Hitler, who became German Chancellor in 1933.  Hitler’s invasion of Poland in 1939 and subsequent war with Britain and France seemed to ensure the American entry into the conflict, but many Americans remained isolationist.  With the bombing of Pearl Harbor by the Japanese in December, 1941, the war machine rolled into full action.

World War Two was a far more extensive conflict for the U.S. than the First World War.  The U.S., Britain, France, the Soviet Union, and China formed the main Allies, while Germany, Japan, and Italy aligned as the main Axis powers.  U.S. production of war materiel exceeded that produced by all of the Axis powers combined, underscoring the extent of the mass mobilization of labor on the homefront.  The War Production Board and the War Manpower Commission were established in early 1942 to over see production on the homefront and mobilization of personnel at home and overseas.  Twelve million men left to participate in the war effort between 1940 and 1944.  Between 1940 and 1945, the number of women working outside the home jumped from 12 million to 19 million—the increase largely due to wartime jobs in factories, agriculture, retail, and the Federal government.[i]

Catholics in the U.S. were more integrated into American culture in 1941 than they had been in 1917.  For one thing, immigration restriction legislation passed in the 1920s curtailed new immigrants, most of whom had been Catholic in the late 19th and early 20th century, from Europe.  Hence, the Catholics who were here had time to become more a part of the culture than during the First World War.  American Catholics generally supported the war, though there were notable objectors, such as Catholic activist Dorothy Day, who maintained a pacifist position throughout the conflict.  Of 11,887 conscientious objectors to the war, however, 135 were Catholic—not a large proportion in a country containing 21 million Catholics in 1940 (of a total U.S. population of nearly 132 million).

Historian James Hennessey calls the Second World War a “rite of passage” for U.S. Catholics, suggesting that participation in the conflict gave them more of a stake in American culture than they had previously.  Patriotism was strong, church leaders supplied much encouragement to its members.  Archbishop Edward Mooney of Detroit wrote a letter to President Roosevelt in 1941 promising that “with a patriotism that is guided and sustained by the Christian virtues  of faith, hope, and charity,” the bishops would “marshall the spiritual forces at our command to render secure our God-given blessings of freedom.”  Archbishop Francis Spellman of New York told troops that “in serving your country in a just cause, you are also serving God.”[ii]

Catholics contributed mightily to the war.  Estimates are that Catholics comprised 25% to 35% of the armed forces.  Three-thousand and thirty-six chaplains served in the armed forces as well.  Where, during the First World War, services to the nation’s soldiers were provided by separate groups such as the YMCA, Salvation Army, Knights of Columbus and National Catholic War Council, all of these organizations teamed up during this conflict into what was known as the United Service Organizations (USO), which included Catholic service workers, particularly the National Catholic Community Service.  In 1940 the U.S Catholic bishops formed the War Relief and Emergency Committe, and in 1942, War Relief Services of the National Catholic Welfare Conference was established to care for refugees, displaced persons, those impoverished by the war, merchant seamen, and Axis prisoners of war.  This organization later became Catholic Relief Services, which still exists for many of the same purposes today.[iii]

Documents here focus on a segment of those services, those of the Catholic Daughters of the Americas, the National Council of Catholic Women, and the Daughters of Isabella.  They point to women fully engaged in the war effort, inspired in their work by fidelity to faith and nation.