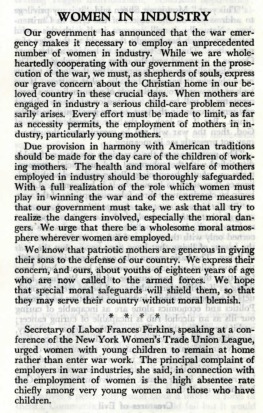 Records of the Catholic Daughters of the Americas, Box 77, Folder 14 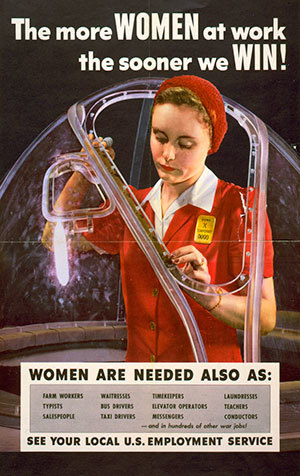 Regent Mary Duffy reported that the affairs of the Catholic Daughters of the Americas were in excellent order on the eve of the Second World War.  War broke out in Europe in 1939, however, and Pearl Harbor was attacked by the Japanese in 1941, bring the U.S. officially into the war. The Daughters became involved on many fronts.  The Daughters asked members to coordinate with the Red Cross, the USO, and other agencies.  Local courts were asked to knit, sew, and make bandages.  Mary Duffy's Sister Agnes, also involved in organizing war activities, told convention delegates in 1941, "throw the weight of influence of the Catholic Daughters of America in maintaining proper moral standards in the community,"  This document addresses the matter of women's changing roles during the war.

After reading the document, consider the following:

World War II- Plan for Cooperation between Affiliates of the NCCW and the National Council of Catholic Nurses, 1942 →