Conservative Critics and the End of Reform: the 1920s

By 1919, John Ryan was riding high. He had just written a powerful statement that seemed to commit the Catholic Church in America to support of all his reforms. He was also in a better position to carry on his work than he had ever been before. Late in 1919, the National Catholic War Council was transformed into the National Catholic Welfare Council (quickly renamed the National Catholic Welfare Conference, or NCWC). The Welfare Conference, like the War Council was created to defend and advance Catholic interests in the Federal government. Ryan was appointed Director of the new NCWC's Social Action Department and thus given an official position or forum and even a small budget to carry out his promotion of reform.

Though there was widespread praise for the Bishop's Program in 1919, the response was not unanimous. Many thought the Program - and its author John Ryan - far too radical. Some of that opposition drew on the anxieties roused by postwar labor turmoil and the emergence of the Soviet Union that erupted in the Red Scare of 1919 - 1920. During the Scare, the government carried out raids on suspected radical aliens and deported thousands of them. The New York State legislature even expelled several duly elected Socialist Party representatives from its ranks. In this environment of conservative backlash, the liberal Ryan and the Bishop's Program he wrote suffered. The same New York legislature's Lusk Committee, established to sniff out suspected radicals, condemned the Bishop's Program and Ryan by name; the National Civic Federation also attacked the Program, but was more cautious about attacking its author, only hinting that Ryan was a dangerous leftist.

As the 1920s unfolded, Progressivism continued to weaken and Ryan and his confederates at the Social Action Department of the NCWC found it harder and harder to advance the reforms outlined in the Bishop's Program. Ryan came under sharp attack again from the National Civic Federation for condemning the open shop campaign of leading manufacturers. His department's efforts on behalf of a minimum wage bill in Ohio also came to naught in the increasingly conservative political atmosphere of the 1920s. The Welfare Conference, while giving Ryan a forum and support, was still a new and fragile organization viewed suspiciously by bishops around the country and warily even by the Vatican in Rome. It would be hardpressed to protect him in the 1920s from his conservative critics, much less whip dissidents into line on behalf of the Bishop's Program.

The failure of a campaign to amend the constitution to prohibit child labor was, perhaps, the best example of the difficulties Ryan personally, and Progressive reform generally, confronted in the 1920s. In 1916, Congress had passed the Keating - Owen Act outlawing child labor, but the bill was declared unconstitutional by the Supreme Court in 1918. A new act passed in 1919 was declared unconstitutional in 1922. Reformers, therefore, sought to amend the Constitution to permit a child labor law in 1924. One state where they expected the amendment to gain some support was Massachusetts where the labor movement, battered and beleaguered in the new conservative era, retained some strength. Prominent Catholic politicians in the state, David I. Walsh, elected as Massachusetts' first Catholic governor in 1914 and later as its first Catholic United States Senator, and James Michael Curley, Mayor of Boston, Congressman and candidate for governor in 1924, backed the amendment initially. Yet when the Archbishop of Boston, William Henry Cardinal O'Connell, came out against the amendment, both Curley and Walsh backed away from their endorsement and fell into an embarrassing silence on the issue. O'Connell actively campaigned against the child labor measure. He ordered pastors in every parish of his Archdiocese to read out a statement condemning it from their pulpits and to recruit volunteers to fight against it.

Ryan had been a longtime advocate of prohibition of child labor, had made it a significant part of the Bishops' program, and continued to fight for it in the 1920s. He and his department helped encourage the National Council of Catholic Women to endorse the amendment and in September of 1924, just two months before the referendum in Massachusetts, the Social Action Department issued two newsletters backing it, citing the Bishop's Program's condemnation of child labor. Just before the Massachusetts election, the American Federation of Labor flooded Boston with copies of a Ryan article attacking the evils of child labor and endorsing the amendment. O'Connell, who had already tangled with Ryan once before, was furious, and, as one of the most powerful figures in the American hierarchy, attempted to put pressure on the NCWC to silence him.

In the end, O' Connell, not Ryan won this battle over child labor, for this was the 1920s, a new era of conservatism, not the 1900s or 1910s, when sentiment for reform had been widespread and deep. The amendment was crushed in the Massachusetts referendum by a vote of over three to one in November of 1924; in largely Catholic Boston it lost by nearly four to one. Backers would not get enough states to pass it in the 1920s.

O'Connell's victory in the child labor fight reflected the tide turning on reform, but the Boston Cardinal's opinions on the question were also a good example of conservative Catholic thinking about the social question. Such thinking had always been broadly held - most bishops probably hewed to it through the nineteenth centuries. Conservatives like O'Connell, or the layman, Conde Pallen, a member of the National Civic Federation drew on what they understood to be Catholic social teaching, just as Ryan did (Pallen and O'Connell even often invoked Leo XIII just as Ryan did), but they came to very different conclusions. O'Connell, in particular, worried, like many Catholics in the early twentieth century, about the state or government becoming too powerful and threatening the rights of families and private institutions like the Church itself. Catholics had suffered from such powerful anti-Catholic governments in France in the early twentieth century. O'Connell and Pallen, like Leo XIII, and even Ryan himself, also feared the rise of materialist socialism through an all powerful state.

Whatever their views, conservatives like O'Connell were in the ascendancy in the 1920s, and it was a difficult time for Ryan. He tried to fight back against the Red Scare and his conservative critics, but he had to determine when to fight and when to lick his wounds and live to fight another day. That day seemed distant then in the mid 1920s, but would come, sooner than he thought.

Questions: Conservative Critics and the End of Reform 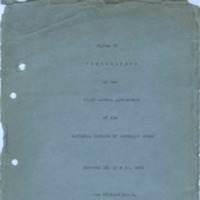 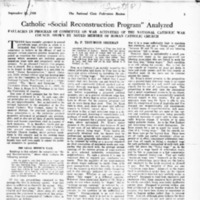 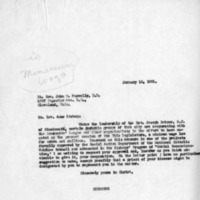 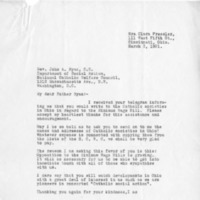 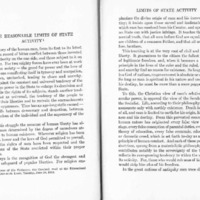 The Reasonable Limits of State Activity 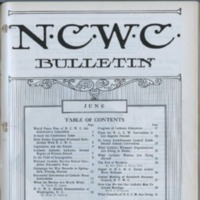 The End of Hysteria 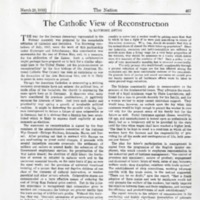 The Catholic View of Reconstruction