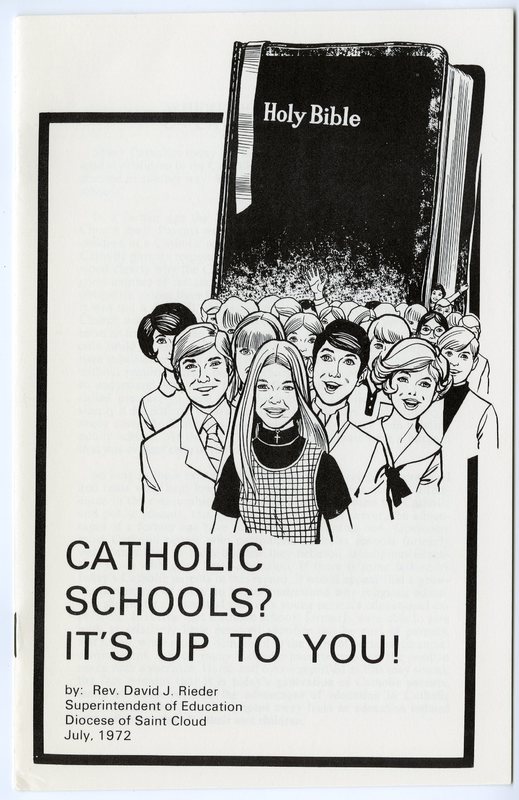 Cover of the booklet published in July of 1972.

In this booklet (click for full text), the Reverend David J. Rieder begins by highlighting some of the ways in which Catholic schools have changed since the turn of the twentieth century. Although he alludes to the abundance of “religious personnel” in that “former age,” the most important change he discusses is the shift from compulsory to voluntary attendance at Catholic schools.

Under the section titled “The Factor of Increasing Costs,” the Rev. Rieder asks “How high do Catholic schools rate on today’s parental list of values?” Citing some enrollment data, he purports to “let the facts speak for themselves”:

Ten years ago in 1962-63 the Catholic elementary and secondary schools in the Diocese of St. Cloud enrolled 18,500 youngsters. During the school year of 1971-72 these schools enrolled 10,500 boys and girls. This is a forty-four percent enrollment decline in ten years! During this same ten-year period the number of Catholic schools in the diocese declined thirty percent, from fifty-five elementary and seven schools in 1962-63 to thirty-nine elementary and five secondary schools in 1971-72.
The total number of lay and religious teachers in these schools declined from 600 in 1962-63 to 468 in 1971-72, or twenty-two percent. Yet, during this same period the number of lay teachers alone increased one hundred percent from 115 to 217. During the 1971-72 school year there were more lay than religious teachers in the elementary school diocese. Similar trends are evident in every diocese in Minnesota.

In the final section of the booklet, titled “Catholic Schools: Serving the Needs of the Nation,” the Rev. Rieder argues:

At a time when so many Catholics appear to have departed from their support of the Catholic schools, it is ironic that the public community itself is beginning to talk in more positive terms about the need for freedom of choice in education and the necessity of religious values in the formation of citizens. Federal and state governments are seeking ways to aid parents who send children to nonpublic schools. Intelligent people now realize that a public monopoly on education will not be good for the people of the country. They also realize that such a monopoly would bring even deeper problems to a public educational enterprise that is already sorely troubled. But that is exactly what may happen if Catholics do not realize soon the opportune position in which they stand to preserve the dual system of education in America; most of the country’s nonpublic schools are Catholic schools.

1. How does the title of the booklet relate to the idea of parental choice?

2. How does the image of the Bible on the cover of the booklet compare to Thomas Nast’s inclusion of the Bible in this famous 1871 cartoon?

3. Based on the enrollment data trends that the Rev. Rieder cites, how do you think he would answer the question he posed at the beginning of the paragraph: “How high do Catholic schools rate on today’s parental list of values?”

4. The Rev. Rieder acknowledges that the enrollment trends are consistent across Minnesota, but based on your background reading, how do you think they would have compared nationally at the time of writing?

5. What does the Rev. Rieder mean when he refers to “the dual system of education in America,” and why does he believe it is important to preserve?