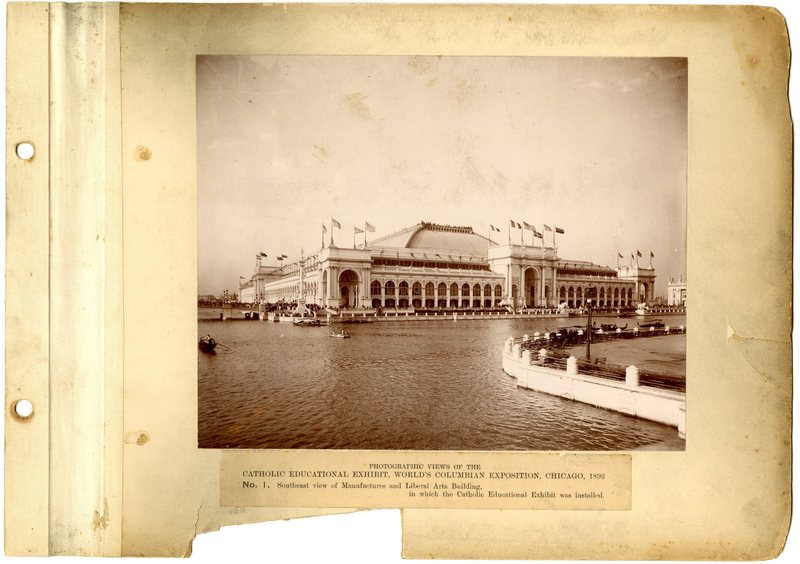 The Manufactures and Liberal Arts Building, in which the Catholic Educational Exhibit was installed. Chicago, 1893.

In 1893, the Catholic Educational Exhibit at the World’s Columbian Exposition offered the American Catholic Church not only “a public space to clearly articulate the philosophy guiding Catholic education,” but arguably the most public space possible. [2] The Exhibit was installed in the Manufactures and Liberal Arts Building, which at the time was the largest building in the world.

If the ultimate objective of the Exhibit was not exactly to promote tolerance through understanding, it was at least to controvert common criticisms. The hierarchical structure of the Catholic Church served as the straw man in many anti-Catholic arguments about why the Church was fundamentally un-American and antidemocratic—specifically in its (alleged) refusal to allow Catholics to think for themselves. An 1894 account of the Catholic Educational Exhibit, “Edited by a well known Catholic writer, under the special supervision of the Rev. Brother Maurelain, Secretary and Manager of the Exhibit, and compiled from his Official Papers and Reports,” lists a few of these anti-Catholic arguments. In the Introduction, the writer characterizes the Exhibit as “a visible and positive refutation of the statements that the Catholic Church is opposed to intelligence; that she delights in the allegiance of the ignorant; that she represses study, and ‘chains the intellect of her people to the wheel of the Pope’s chariot.’” [3] (It is unclear where the “chains… chariot” quotation comes from—the writer offers no citation—but presumably he meant to invoke a contemporary accusation levelled against the Church.)

Such arguments were, in large part, the reason why Catholics felt compelled to establish their own school system in the first place. Although Catholics had been a religious minority in the U.S. since colonial times, it wasn’t until the nineteenth century that their numbers grew large enough to attract attention. Meanwhile, the influx of Irish, Italian, and Polish (i.e., traditionally Catholic) immigrants around the turn of the twentieth century caused Catholics to be vilified not only for their religious beliefs, but also for their ethnic practices. The public schools of the day—which had “emerged from the culturally homogenous Puritan colonies of New England” [4]—did nothing to temper anti-Catholic prejudice. On the contrary, they were hotbeds of it. As Timothy Walch argues in Parish School (2003), “the curriculum of the early common schools included heavy doses of Protestant instruction and anti-Catholic propaganda.” [5] Keen to insulate their children from attacks on their faith, Catholics went their own way.

In 1884, the Third Plenary Council of the Catholic Church in the United States issued a number of education decrees—one of which required all Catholic parents to send their children to parochial schools. [6] The hierarchy has been widely criticized for this mandate, which “failed to face the clear fact that the American church lacked the economic resources to provide a Catholic education for every [Catholic] child.” [7] Moreover, the means by which the Church attempted to enforce the mandate also drew criticism; around the time of the Vatican’s Instruction of 1875 and the Third Plenary Council in 1884, some Catholics advocated for punishing Catholic parents who continued to send their children to public schools. [8] The punishment they had in mind? Denial of the sacraments. Other Catholics thought such denial would be draconian, and would only fan the flames of anti-Catholic prejudice by propping up an image of a Church cruel enough to deny absolution to its own adherents.

At times the establishment of Catholic schools has been viewed as a product of Catholics’ siege mentality in an atmosphere of anti-Catholicism. [9] By walling themselves in and exiting the mainstream, however, Catholics inevitably only appeared even more other—which is to say, even more different and apart from the rest of American society. [10] Hence the Catholic Educational Exhibit at the 1893 World’s Fair and the effort it represented to cast off suspicion of Catholic schools by exhibiting heaps of evidence of their educational accomplishments. (As you can see, the exhibition practices of the period really do amount to heaps.) 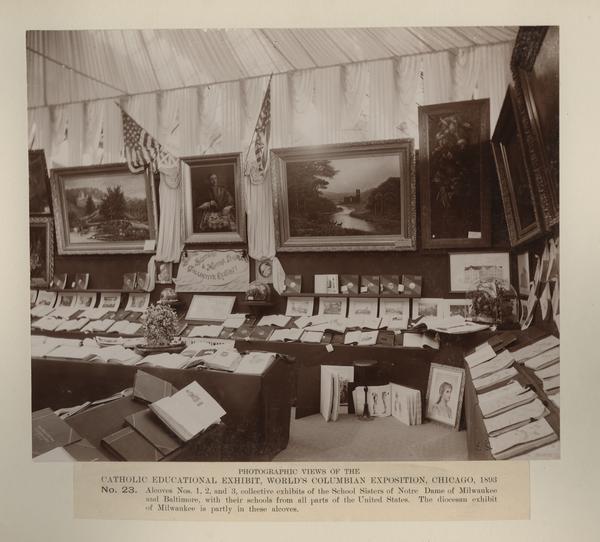 Photograph from the 1893 Catholic Educational Exhibit. From today’s perspective, the clutter is more reminiscent of a booth at an antique mall than a room of an exhibit!

Interestingly, the World’s Columbian Exposition, as it was formally titled, held significance for Catholics for reasons other than its promise to attract large audiences. Commemorating the four-hundredth anniversary of Christopher Columbus’s arrival in the New World, the Columbian Exposition offered American Catholics an opportunity to shore up their Americanness; bankrolled by Spain’s Catholic monarchs, Ferdinand and Isabella, Columbus’s 1492 expedition west was in their minds the Catholic analog—not to mention antecedent—to the Protestant pilgrims’ landing at Plymouth Rock in 1620.

To summarize, then, the 1893 Catholic Educational Exhibit sought to demystify the goings-on of a school system that had been forged as a rejection of public schools. But the conditions that made the creation of a Catholic safe-haven necessary in the nineteenth and early twentieth centuries had more or less vanished by the middle of the twentieth century. The election of a handsome, articulate Irish Catholic to the highest post in the country in 1960 dispelled much of the anti-Catholic prejudice that had hung over earlier decades. John Fitzgerald Kennedy was seen to implicitly defy Catholic stereotypes. He was an athletic and well-groomed WWII hero, not, in the words of Dr. Maria Mazzenga, “weird, foreign, dirty, [or] oddly ritualistic.” [11]

Around the same time, the Second Vatican Council (1962–1965) championed considerable changes within the Church that ultimately left many Catholics feeling at sea. As Carleen Reck synopsized in 1991: “In past years, Catholics often were identified in terms of fish on Fridays, fasting during Lent, and Latin in the Mass. These identifiers became obsolete when Vatican II urged the voluntary practice of external penance and wider use of the vernacular.” [12] In short, by the 1960s, Catholics were no longer sharply defined either externally or internally. Without a yang to their yin, Catholic schools started to lose sight of their sense of self. As past president of Catholic University Father William J. Byron, S.J., put it: “There is nothing like the presence of an external enemy to solidify a community in shared identity and mutual support. Catholics are more comfortable in the United States today. They are less rigid about their religious practice.” [13] As subsequent generations melted in the proverbial pot of American society, Catholics “became, with some exceptions, indistinguishable from white, Protestant America.” [14]

[6] A quick note about the term “parochial.” As Neil McCluskey points out in Catholic Viewpoint on Education (1959): “Though the term ‘parochial’ is commonly interchanged with the term ‘Catholic’ in reference to the schools, they do not mean the same thing. A Catholic parochial school is a parish-sponsored school; a Catholic school may be either a parochial school or a private, independent institution” (p. 73). This distinction is important because it helps underscore the shift from community-based ethnic schools in the early twentieth century to tuition-dependent private schools in the latter twentieth century.

[10] In her 1995 article “Identify Formation and the Process of “Othering,”” Lois Weis suggests that othering “serves to mark and name those thought to be different from oneself” (p. 17).