While the cultural impact of the Civil Rights Movement (ca. 1954–1968) should not be underestimated, we have seen that, by the 1960s, Catholic schools were already sensitized to issues of discrimination. This may be partly attributed to the fact that American Catholics had experienced discrimination firsthand throughout the nineteenth and early twentieth centuries, not only as religious minorities but also as first-generation immigrants. But in large part this sensitivity sprang from Catholic social teaching, as discussed in the foregoing section. Those teachings would be upgraded and amplified during the Second Vatican Council (1962–1965), which underscored ecumenism, or Christian unity. In his 1994 article “Racial Justice and the People of God,” John T. McGreevy calls the overlap of the Civil Rights Movement and Vatican II a “crucial conjunction”: “At precisely this moment, as American Catholics reevaluated their roles in contemporary society, the national focus on racial issues and urban poverty provided a mechanism for engagement with the world.” [71]

In their 1970 book S.O.S. for Catholic Schools, Father C. Albert Koob (then-president of the National Catholic Educational Association) and his co-author Russell Shaw begin by describing a hypothetical school that typifies “Catholic Education Today,” the title of the first chapter. St. Patrick’s, the authors tell us, was built in 1890, “stands in a bleak, decaying neighborhood at the heart of a large midwestern city,” and has a “mixed” student population of whites, Puerto Ricans, and Blacks, most of whom are “disadvantaged” (i.e., poor). [72] The authors go on to describe the predicament that inner-city schools like St. Patrick’s found themselves in and the decision they had to make: “The white Catholic population of the parish that had built and maintained the school had largely moved away. A new population, [B]lack, Puerto Rican and lower-middle class, had taken their place. The school could struggle to go on as it was, a “parish” institution that served a diminishing clientele. Or it could deliberately choose for itself an experimental role—one based on community service and educational innovation—and thus hope to have meaning for the future.” [73] The phenomenon that Koob and Shaw describe is commonly referred to as “white flight,” or the migration of white people from urban areas into the suburbs. In effect, the demographic changeover of geographically-defined parishes gave Catholic schools new purpose. Whereas schools like St. Patrick’s might have been built to educate the children of nineteenth-century European Catholic immigrants, by the mid-twentieth century they were either shutting down or embracing “a social mission to serve less advantaged, mostly non-Catholic children.” [74]

As one of its final acts, the Young Catholic Messenger (YCM) ran a series called “Show Us Brave” inviting very frank discussions of systemic racism. The first article appeared in October 1969; the last appeared in April 1970, shortly before the final issue of YCM on May 8, 1970. (As an aside, in the final issue, the editor openly laments the reason for YCM’s demise, alluding to the contraction of the Catholic school network: “... unfortunately there are no longer enough of you [i.e., Catholic school students] to make its publication possible.” [75]) In the Teacher's Edition from the December 1969 issue appears this very cutting suggestion (emphasis added): “At some point the teacher may wish to avert to another form of discrimination, that which makes it necessary for students to learn the truth about the Negro in American history in supplements instead of in their basic textbooks. That form of discrimination is, of course, the shunting aside of the Negro (or a distortion of his role), a feature of American education for a number of generations.” [76] One of the documents featured later in this exhibit offers an eloquent dissection of questionable passages concerning Blacks from an American history textbook; see Vice President of the Brooklyn Catholic Interracial Council Archibald F. Glover’s “Critique on the Historical Treatment of the American Negro.” 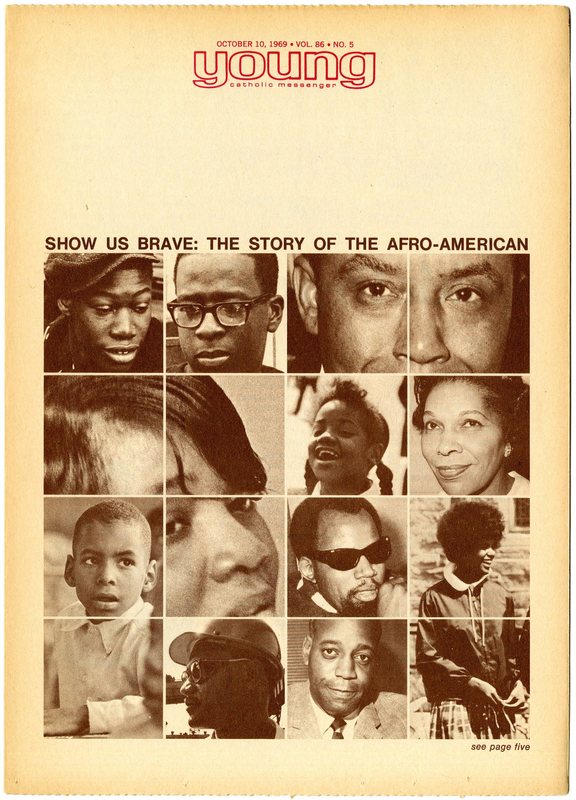 The cover of the October 10, 1969 issue of Young Catholic Messenger, featuring the first article in the “Show Us Brave” series.

Writing in 1989, Andrew M. Greeley saw concern for the disadvantaged as a hallmark of Catholic schools, which he noted have been “especially successful in educating the disadvantaged—the educationally, emotionally, economically, racially, and academically impoverished.” [77] Similarly, in his 1991 paper “Catholic Identity and the Future of Catholic Schools,” James Heft proudly reported that Catholic schools had “increased minority enrollment from 11 percent in 1970 to 23 percent in 1989.” [78] But while it has generally been seen as a positive development, the increase of non-Catholic enrollment in Catholic schools has at times further contributed to the late twentieth-century existential anxiety over whether we still need Catholic schools at all. As Baker and Riordan wrote in 1998: “nothing changes a religiously oriented school more than the presence of large numbers of nonbelievers.” [79] They concluded that “Although Catholic schools as an academic enterprise seem alive, as a religious enterprise they may be even closer to death than anyone thought.” [80]

[72] C. Albert Koob and Russell Shaw, S.O.S. for Catholic Schools: A Strategy for Future Service to Church and Nation (Holt, Rinehart and Winston, 1970), 1.

[79] Baker and Riordan, “The ‘eliting’ of the common American Catholic school and the national education crisis,” 4.