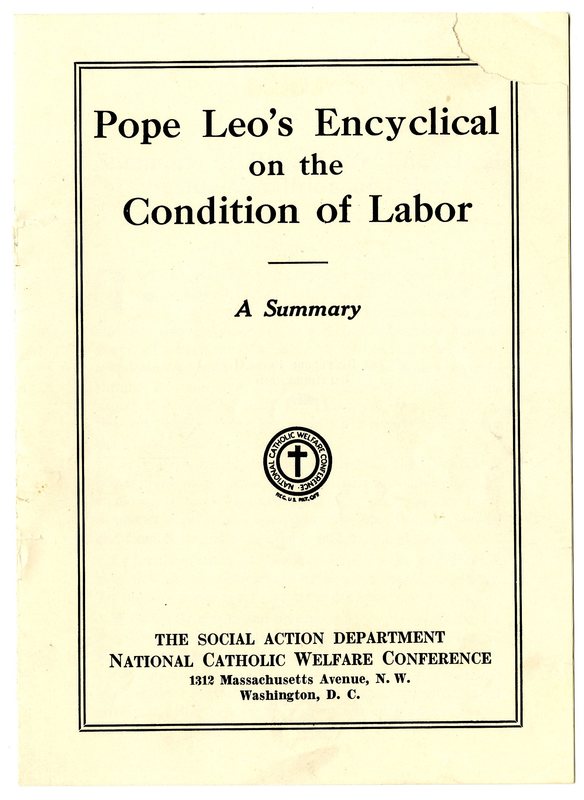 Pope Leo XIII’s 1891 encyclical Rerum novarum is often seen as the fountainhead of modern Catholic social teaching. This summary of the encyclical was published sometime in the 1930s.

In his 2020 article on “The Reverse Integration of St. Joseph’s School,” Paul T. Murray acknowledges the Catholic “tradition of submission to clerical authority” as one of the key factors in quashing racial prejudice in the Church. [62] Since the 1890s, the Church’s stance on social justice has been clearly and powerfully articulated by members of the Church hierarchy.

The roots of modern Catholic social teaching are commonly traced to Pope Leo XIII’s “landmark 1891 document Rerum novarum,” [63] which expressed concern about working conditions amidst the Industrial Revolution. Despite the rather narrow historical context in which it was written, Rerum novarum continued to inspire action on behalf of other poor and disadvantaged groups in the twentieth century—namely through John A. Ryan, whose ideas informed the New Deal programs of the Great Depression.

In 1939, the Commission on American Citizenship (CAC) was organized at The Catholic University of America in accordance with Pope Pius XI’s request to produce a “constructive program of social action.” [64] At the time George Johnson was the Director of the National Catholic Welfare Confernece’s Department of Education. In an article published in The Journal of Educational Sociology in 1943, Johnson explained: “There exists in the Catholic Church a definite body of social and economic teaching which it should be the function of Catholic education to translate into practice.” [65] Thus, the CAC “develop[ed] a curriculum to prepare children for Christian social living on the elementary level and [decided] to implement this with a series of basic readers,” known as the Faith and Freedom series. [66] (See the digitized textbooks for yourself!) 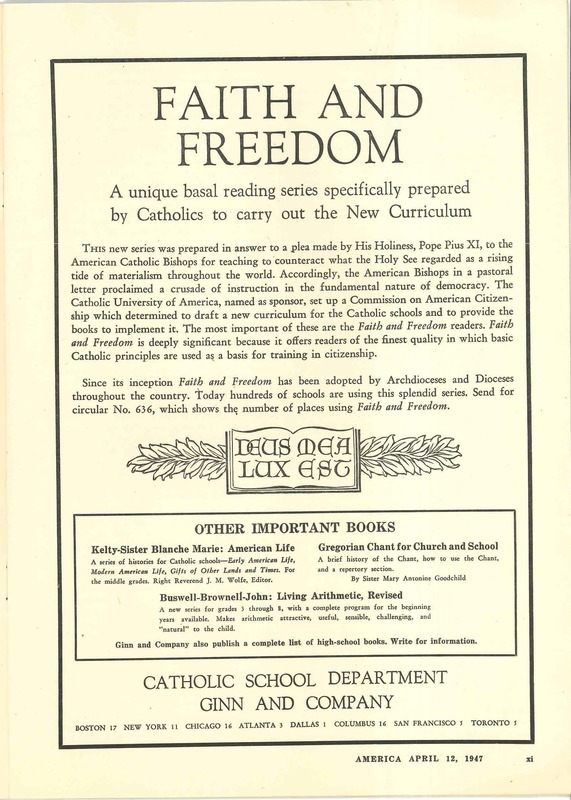 An advertisement for the Faith and Freedom basal reading series which appeared in the April 12, 1947 issue of America magazine. The ad describes the textbook as part of a "crusade of instruction in the fundamental nature of democracy."

The overarching mission of the CAC was to counter the manifold “social theories in variance with Christian teaching and contrary to free American institutions”—i.e., Nazism, Facism, and Communism, the ideologies in question during WWII and the ensuing Cold War. [67] In order to fulfill that mission, Johnson assured his readers that “every effort [was] made to make children understand that true Christianity frowns on all forms of prejudice, segregation, and separatism.” [68] In a blog post from October 13, 2016, Dr. Maria Mazzenga highlighted a story from the 1943 textbook These are Our People titled “Eddie Patterson’s Friends.” The story evokes stereotypes of Chinese Americans and African Americans by telling us that one of the fathers of Eddie’s friends works at the laundry while another works as a porter on a train. As Dr. Mazzenga points out, the story boldly rejects the societal racism of the day; the 1882 Chinese Exclusion Act, which prevented Chinese immigrants from gaining citizenship, was only repealed in 1943; meanwhile, Blacks and whites were legally segregated all the way up until the Civil Rights Act of 1964.

Also in 1943, against the backdrop of World War II and the Holocaust, Pope Pius XII issued the encyclical “The Mystical Body of Christ”—condemning any form of prejudice based on race or nationality. Although Jews were the primary race in question at the time it was written, the doctrine of the Mystical Body has since been applied explicitly to Blacks’ struggle for equality in the United States.

In summary, Catholic social teaching ensured that American Catholic schools were ahead of the curve. Murray points out that “Catholic institutions frequently integrated well before the Brown decision”—wherein the Supreme Court unanimously ruled on May 17, 1954 that segregation in public schools violated the Fourteenth Amendment. [69] This is especially notable given that, as non-public schools, “Catholic schools were not directly affected by the Brown decision.” [70] They integrated without having to be told.

[66] Johnson, “The Commission on American Citizenship of the Catholic University of America,” 381.