After the Sister Formation Conference 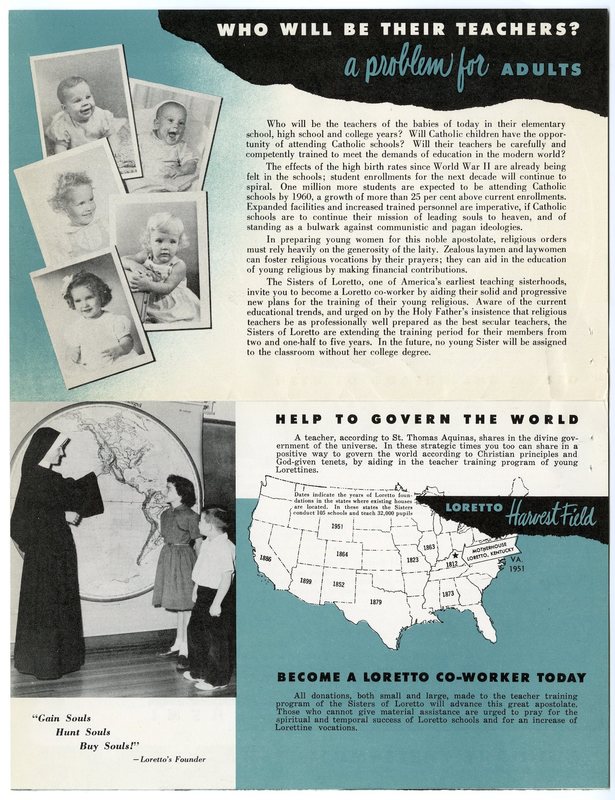 This brochure published by the Sisters of Loretto sometime in the 1950s invokes the multifaceted problems facing sister-teachers, from the "high birth rates since World War II" to "the Holy Father’s insistence that religious teachers be as professionally well prepared as the best secular teachers."

In the background of the Sister Formation Conference loomed the baby boom—which McCluskey alluded to in 1959 as “the army of little people whose feet are already pointed toward the doors of the Catholic schools.” [46] He anxiously observed that the Catholic school enrollment was “growing almost four times as fast as the number of teaching Sisters who have thus far been the mainstay of the parochial school system.” [47] In short, the increased demand for sister-teachers far outstripped the supply from the novitiates, “which were simultaneously struggling to ensure that every new teacher entered the classroom with a bachelor’s degree in hand.” [48] In order to make up the difference, Catholic schools began hiring more lay teachers.

From his vantage point in 1959, McCluskey saw the problem as a pickle, not an all-out calamity. In fact, he was optimistic that these changes were “healthy signs of the coming age of Catholic education in America.” [49] He anticipated that the new influx of lay teachers might help propel the comparatively small number of sister-teachers into supervisory, leadership roles—which would be consistent with their new professional preparation, courtesy of the Sister Formation Conference. Unfortunately, McCluskey got it wrong.

The solution to supplement sister-teachers with lay teachers wreaked havoc on the Catholic school system. Between 1946 and 1959, the number of lay teachers in Catholic grade schools swelled from 2,768 to 22,051—“an increase of nearly 800 per cent.” [50] The increase in lay teachers had a dramatic impact on the operating costs of the schools. It boils down to the fact that, unlike lay teachers, sister-teachers never required competitive salaries. McCluskey sums it up this way: “In the dedicated celibate life of a Sister or Brother there is no preoccupation with promotion, salary, retirement, and other materials benefits which must necessarily occupy the attention of the majority of lay teachers.” [51] Now Catholic schools had to budget for the salaries of their lay employees. 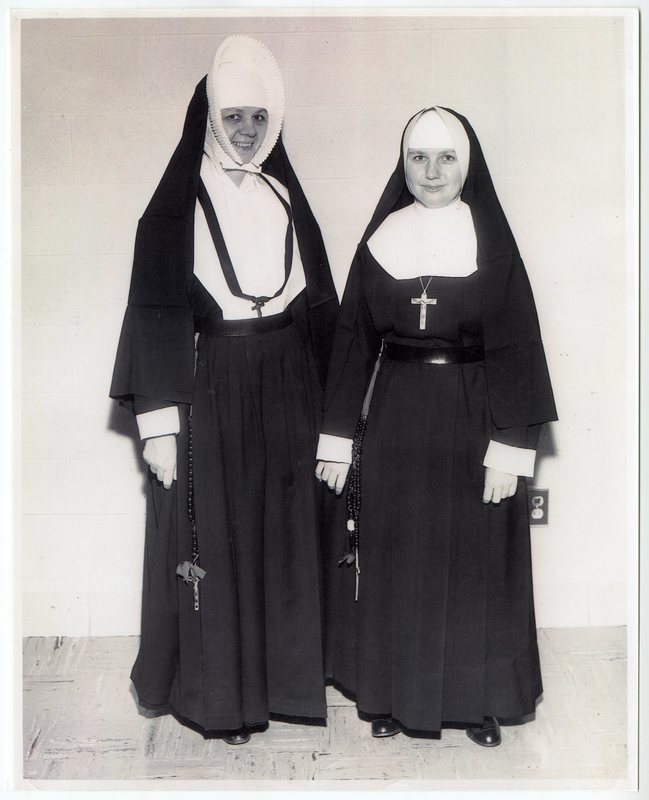 Sisters of Bon Secours modeling the original habit (left) and the first modification (right) in 1960.

Meanwhile, Vatican II encouraged renewal throughout the Church but especially in religious life. Thanks to the Sister Formation Conference, women religious already had a head-start. Beginning in 1951, Pope Pius XII had called upon sisters to improve their professional training and to modernize their attire—foreshadowing some of the changes introduced by the Council in the next decade. Under the “Catholic Schools” section of its Declaration on Christian Education, Gravissimum Educationis, the Council stated: “[Teachers] should therefore be very carefully prepared so that both in secular and religious knowledge they are equipped with suitable qualifications and also with a pedagogical skill that is in keeping with the findings of the contemporary world.”

Part of the renewal of religious life included more active engagement with society—hence Cardinal Leon Joseph Suenens’ 1962 book The Nun in the World. “[N]umerous orders granted sisters new freedom when it came to deciding what work to perform,” Leslie Woodcock Tentler explains in her book American Catholics: A History (2020). Unfortunately for Catholic schools, though, “Growing numbers soon opted for ministries other than teaching, historically the principal task of American sisters.” [52] According to Thompson, “When they left the parochial school system in large numbers, many Catholics charged the sisters with abandonment.” [53]

Thompson stresses the fact that Vatican II alone was not responsible for the dwindling numbers of women entering religious life nor for the departures of those already living in religious communities. Nevertheless, the fact remains, as Tentler points out: “Reform divided sisters [...]. [...] Growing numbers of sisters left, with departures ticking upward in 1965 and reaching a peak around 1970.” [54] As a result of the Sister Formation Conference, women religious in America by the time of Vatican II were well-educated and “eminently employable.” [55] If, then, the various Vatican II renewals alienated a sister, she would have no trouble supporting herself outside of her religious community.

What looked at first like a “crisis of success” morphed into a plain crisis by the mid-1960s. [56] The explosion of school-age baby boomers coupled with the shrinking number of sister-teachers made it necessary to fill the gap with more and more lay teachers. But in order to properly compensate the lay teachers, Catholic schools had to raise tuition—which inevitably restricted the number of families who could afford to enroll their children in Catholic schools. Walch reports that: “In the years leading up to and including 1962, the demand for parochial education and the enrollment of children in those schools increased each year without fail. But suddenly and without warning, enrollments began to drop.” [57] As Tentler notes, in the decade after Vatican II, “The number of Catholic schools nationally decreased by 24 percent between 1965 and 1975, while enrollment fell even more dramatically—by 35 percent.” [58]

In effect, the Sister Formation Conference was partially responsible for ushering in a new chapter in the history of Catholic schools—one less focused on the traditional mission of educating all Catholic children in a given parish. In the face of declining enrollments, Catholic schools became increasingly tuition-dependent and started to accept “students from the surrounding neighborhood without regard for their religious affiliation.” [59]

[59] Albert Koob and Russell Shaw, S.O.S. for Catholic Schools: A Strategy for Future Service to Church and Nation (Holt, Rinehart and Winston, 1970), 2.

← Before the Sister Formation Conference
Next Page: