Conflicting Visions of Race and Power in the FCC 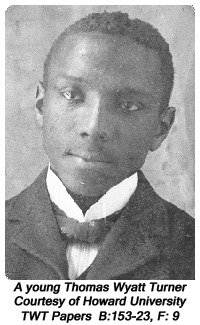 The initial impetus for the establishment of the body which became the Federated Colored Catholics came with the United States' entry into the First World War. Shortly after the mobilization of American troops, the YMCA organized stations on military bases, offering a variety of services for white and black Protestant soldiers. The Knights of Columbus followed suit, opening a number of clubhouses for white Catholics soldiers. The needs of African-American Catholic troops, however, remained unmet. Thomas Wyatt Turner, a biologist that had earned his doctorate in the field at Cornell University (1921), then went on to become the head of the Biological Studies Department at Hampton Institute, quickly organized a committee of African-American parishioners of St. Augustine Church in Washington, D.C. and petitioned Cardinal James Gibbons of Baltimore to address the problem.

At the end of the war, this Committee Against the Extension of Race Prejudice in the Church, as the group called themselves, changed its name to the Committee for the Advancement of Colored Catholics and petitioned the American bishops to address the growing racial violence spreading across the United States. Receiving a lukewarm reception from the hierarchy, Turner began communicating with the Apostolic Delegation on an number of issues, including the absence of African-American clergy, discriminatory practices of the Josephites and Catholic Universities, and the need for greater African-American representation on the boards of various Catholic welfare organizations.

In 1925, one year after reorganizing themselves as the Federated Colored Catholics, Turner and his supporters convened in Washington, D.C. At the convention, Turner described the FCC as "a voice of the Catholic Negro in America." The first constitution further expressed the goals of the Federation:

The object of this Federation shall be to bring about a closer union and better feeling among all Catholic negroes, to advance the cause of Catholic education throughout the Negro population, to seek to raise the general Church status of the Negro and to stimulate colored Catholics to a larger participation in racial and civic affairs.

In Black Catholic Protest and the Federated Colored Catholics 1917 - 1933, historian Marilyn Wenzke Nickels explains Turner's vision of the FCC in the following way:

"The Federation remained for [Turner] a reception house for complaints of discrimination, a vehicle for organizing an annual convention and a voice to speak to the hierarchy on behalf of black Catholics."

The next few years saw Turner defending this vision against challenges posed by Fathers John LaFarge and William M. Markoe. Father LaFarge, described by historian Cyprian Davis as a "patrician" whose mother descended from Benjamin Franklin and Commander Oliver Hazard Perry and who was educated at Harvard University, conceptualized the FCC as a forum in which the brightest black and white Catholic minds could come together and educate the American Church, thereby eliminating the ignorance that underpinned arguments that were prejudiced and discriminatory. Along with educating the American Church, Father LaFarge believed that the FCC needed to develop a program of local, activist chapters through which interracial justice could be practiced. While echoing many of Father LaFarge's sentiments, Father Markoe, a native of Saint Paul, Minnesota and pastor of the African-American Saint Elizabeth Parish in Saint Louis, Missouri, often expressed similar views in much more direct ways. Criticizing the FCC as a "Jim Crow organization," Father Markoe once described his appointment as editor of the FCC's monthly journal, The Chronicle as "infiltrating the organization." Both LaFarge and Markoe believed the primary goal of the FCC should be to advance the mission of the Catholic Church and not merely the status of African-Americans within it.

Differences in outlook among Turner, John LaFarge, and William Markoe served as the catalyst for a number of conflicts that beset the FCC between 1925 and 1932. One gains a greater appreciation for the resulting change in philosophy by comparing the above FCC statement with the following excerpt from the organization's 1932 constitution:

The object of this Federation shall be to bring about a clearer union and a better feeling among all Catholics; to promote relations between the races based on Christian principles; to advance the cause of Catholic education throughout the Negro population; to seek to raise the general status of the Negro in the Church; and to stimulate Catholic Negroes to a larger participation in racial and civic affairs of the various communities and of the whole country.

After the 1932 convention, the FCC changed its name to the National Catholic Federation for the Promotion of Better Race Relations and renamed its journal the Interracial Review. As a result of his protesting against the change, the federation's executive committee removed Thomas Wyatt Turner from office, a decision that led to the splintering of the organization. The documents on this website are intended to illuminate the FCC evolution, the role of the particular actors in that transformation, and finally to raise questions about African Americans, race, and the history of the Catholic Church in the United States.

← Struggling to Create a Free African-American Catholic Community
Next Page: