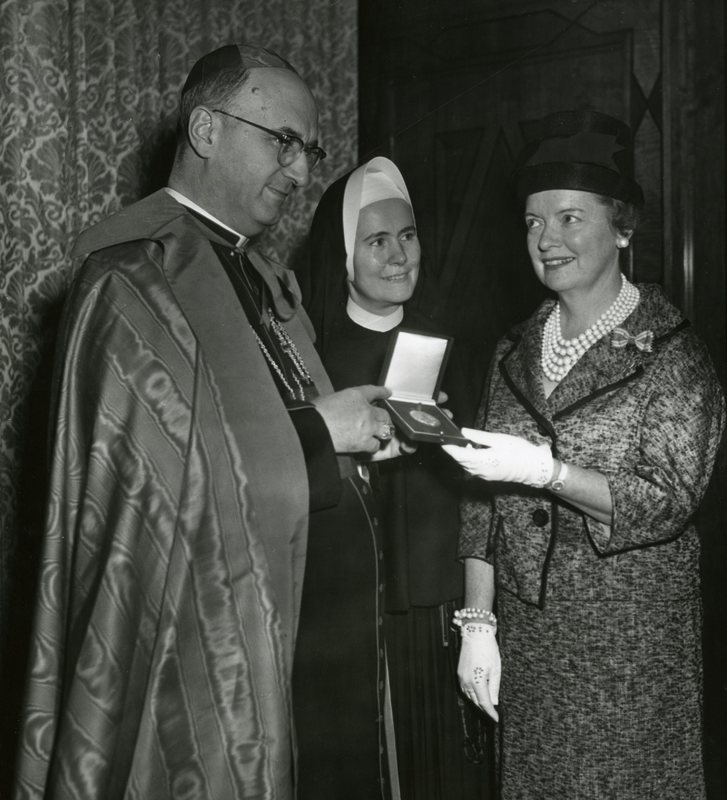 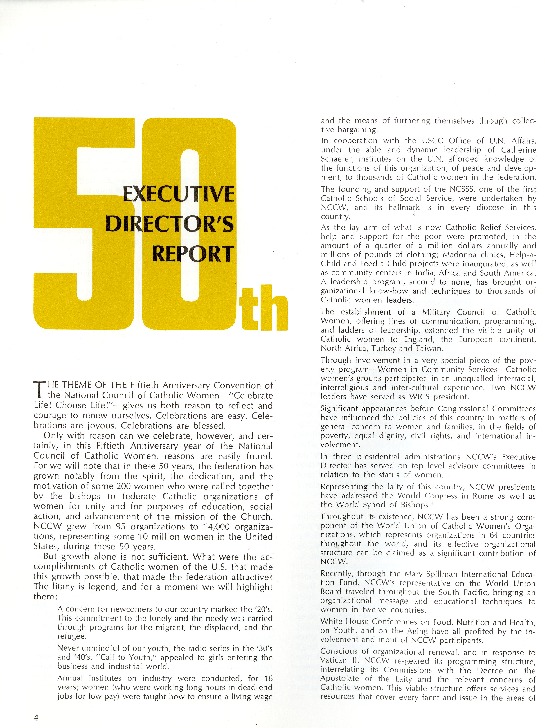 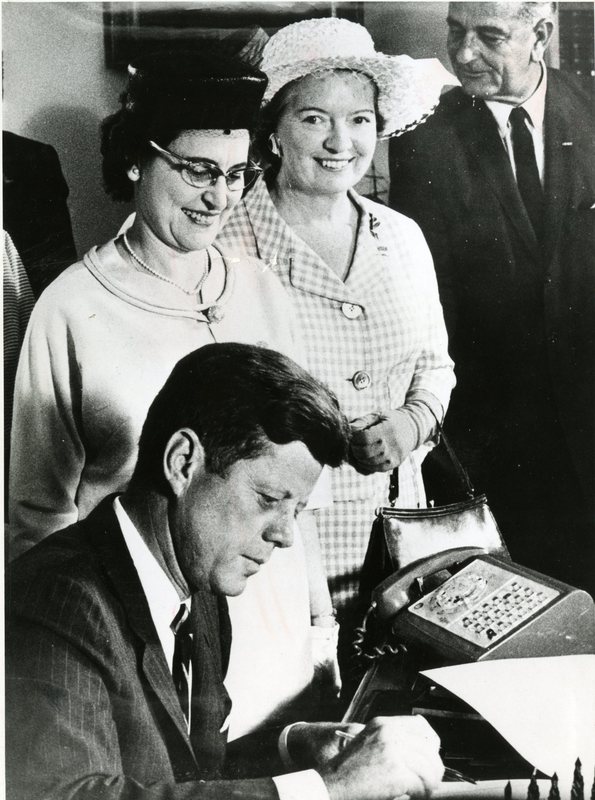 I’ve always been intrigued by photographs of Catholic laywomen from the 1960s.  If you dig into the archives of mainstream Catholic women’s organizations and clubs, you’ll see the same images over and over: middle-aged, middle-class, white women in hats, cats-eye glasses, and white gloves smiling for the camera and handing checks to priests.  But we should look closer; they are not as monolithic (or as bland) as they seem at first glance.  In my research into Catholic laywomen’s responses to the Second Vatican Council I was continually surprised, and occasionally astonished, by what I found.

When I began exploring in the records of the National Council of Catholic Women (NCCW), the official umbrella organization for laywomen’s groups across the country, I expected to find a certain amount of heel-dragging when it came to the changes of Vatican II.  These were fairly traditional women, I thought, likely to be wary of change.  I also knew, from my previous research on the history of the American Catholic feminist movement, that the NCCW was an anti-feminist organization, setting itself in opposition to those who called for women’s rights in the church.  I was wrong on both counts.

At the time, self-identified Catholic feminists derided the NCCW as anti-feminist.  For example, the out-spoken feminist Sister Margaret Ellen Traxler once claimed they had a “Neanderthal self-image as women” and chastised them for having a traditional “altar society” mentality.  According to Catholic feminists, NCCW women were not open to change.[1]  But even a cursory glance through NCCW’s records proves that this perception of them is patently untrue.  NCCW was inspired by the teachings of Vatican II, and tried on many new ways of looking at the world in the decade following the Council.  NCCW leadership attempted to modernize its publications and procedures, educate its membership about contemporary theological questions, and encourage participation and leadership.  They hoped to build an active, questioning, forward-thinking membership that was ready to take on the challenges of the new church in that very challenging decade.

I took these discoveries in stride, but my “Aha! moment” came when I realized that the NCCW was far more feminist than I ever would have suspected.  I saw hints of it from my first days in the NCCW records.  A review recommending a feminist book, a sarcastic aside about domineering pastors, a front page story on feminist theology.  Huh, I thought.  Well, it’s probably just a fluke.  But the evidence kept piling up.  When I realized that they hired Arlene Swidler, a well-known self-identified feminist, to edit their magazine in 1970 I was completely surprised.  NCCW’s leadership, guiding one of the most conservative of Catholic women’s organizations, had turned feminist, right under everyone’s noses.  Yet other feminists at the time denied that this was true.  What was going on here?

NCCW’s foray into feminism is instructive because it helps us understand both the transition that ordinary laywomen were undergoing during this time, and the fluid nature of feminism in the 1960s.  The Vatican II transition and the Women’s Liberation Movement were concurrent.  Catholic women were simultaneously challenged to redefine fundamentally their identities as Catholics and as women.  These two processes were interrelated since, for most laywomen, Catholicism helped define their gender identities.

If anything, historians have viewed these two movements as fully formed outside forces, buffeting these women from either side.  In this view, change was imposed upon them, and they either followed or refused to follow.  Thus, they are defined as supporters or as opponents.  Liberals or Conservatives.  Feminists or Anti-feminists.

But the records tell a different story.  First of all, these women weren’t passive; they were builders, seekers, organizers, leaders.  They challenged what they were told from all sides, and puzzled out their own options.  When they thought they had answers, they sought to educate their people and guide them through the dizzying array of possibilities when everything seemed to be in flux.

Secondly, “feminism” was not yet calcified in the 1960s.  Many women picked up ideas from the movement and explored them, accepting some and rejecting others.  Margaret Ellen Traxler looked at the NCCW and concluded that since they rejected the Equal Rights Amendment they must be anti-feminist.  In reality, the NCCW leadership had picked up other ideas that emerged from the movement, like women’s right to self-determination, leadership, and opportunity.  They used the emerging language of feminism, combined with the energy of Vatican II, to challenge the limited roles they had been offered as laywomen in the church.

The document I’ve chosen to showcase demonstrates this dynamic process of change, revealing how NCCW made its own way through the confusion.  In 1970, NCCW’s long-time leader Margaret Mealey wrote the executive director’s report for the group’s 50th anniversary.  In this remarkable document, Mealey writes passionately about the importance of women’s organizations and women’s leadership.  She states flat out that women deserve justice in the church.  Mealey writes that “there can be no differentiation between male and female, no unequal consideration and treatment, no relegation to demeaning roles.”  She also links feminism and Vatican II explicitly: “The documents state that no longer need woman’s identity as a person be submerged because of her role as a wife and mother.  Her whole person must be developed to the fullest so she may make the unique contribution she was meant to make….”

This document also shows the ways Mealey’s feminism differed from other Catholic feminists.  Mealey condemned “drastic action” taken by “some secular and ‘Catholic’ organizations of women.”  Such protests were not “the way chosen by all to highlight inequities.”  Mealey clearly felt the need to distance herself from those calling themselves feminists, but while she decried their approach, she did not deny their ideas.  “NCCW is deeply committed to the goal of helping women achieve their full stature, in justice and with an equal measure of dignity,” she concluded.

Mealey’s report is a beautiful and honest reflection on women’s organizations in a time of transition and turmoil.  “In this day and age, are we equipped to leap from our own dependency to realistic maturity?” she asked her membership.  “Can we adjust to the new pattern?”  Many had reason to doubt the future of organizations like the NCCW, most of which had begun to lose membership as the rising generation of women failed to join as their mothers had.  But Mealey was convinced that women’s leadership was the answer.  Not the leadership of the past, however.  “As women,” she asked, “are we secure enough to take our place, our rightful place, as an essential segment of the people of God?”

Mealey herself concluded that “present and succeeding generations of men and women must ultimately resolve the ‘woman’ question in new ways, and through diverse patterns.”  She knew that there were many ways to advocate for women and to achieve justice.  Her words remind us to be careful with our labels as we explore the history of Catholic women in the 1960s.

1. What is Mealey’s attitude toward the future?  Does she think women’s organizations are in jeopardy?  What might hold them back?

← Feminism and the NCCW