The American Catholic Church and Kristallnacht 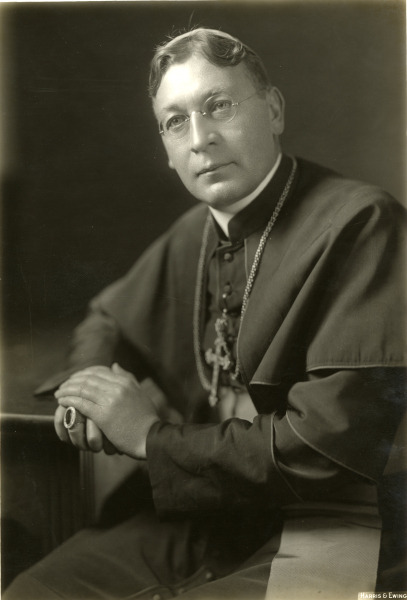 Kristallnacht, which literally means "night of crystal" refers to the broken glass of Jewish-owned homes, synagogues, and shops that lined the streets of cities where anti-Semitic pogroms took place across Germany and Nazi-occupied territories on November 9-10, 1938. The violence began after Herschel Grynszpan, an eighteen-year-old Jewish youth living in Paris, shot German diplomat Ernst vom Rath in retaliation for his family's deportation from Germany to the Polish border. In the Nazi-sanctioned violence following vom Rath's death on November 9th, 91 Jews were killed, and hundreds more beaten. Thousands of Jewish shops and homes were smashed. More than 1,000 synagogues were burned, vandalized, or destroyed completely. Thirty-thousand Jewish men were arrested and sent to concentration camps-with more than 1,000 dying in those camps. Due to the systematic, thorough, and widespread nature of the violence against Jews that occurred during the pogrom, it is now viewed by most scholars as the beginning of what we today call the Holocaust-the systematic persecution and murder of approximately six million Jews by the Nazi regime and its collaborators. 1

The United States Responds to Kristallnacht

Because the Nazi regime had not yet censored or expelled foreign journalists to the extent they would later on, the world received swift and accurate reporting of Kristallnacht as it was happening as well as immediately afterward. Both The New York Times and The Washington Post, for example, ran detailed articles in their November 10, 1938 issues on the violence erupting in Germany as Ernst vom Rath died. "The greatest wave of anti-Jewish violence since Adolph Hitler came to power in 1933 swept Nazi Germany today," reported The Washington Post on November 11, 1938. The New York Times gave a city-by city account of the attacks on Jews, their businesses, and their synagogues across Germany and territory occupied by Germany.2 Nearly every American newspaper condemned Germany for its actions. President Franklin Roosevelt declared he "could scarcely believe that such things could occur in a twentieth century civilization" and announced the recall of the German Ambassador. As historian Deborah Lipstadt shows, the immediate response in the U.S. as reflected in the press was nearly universally one of alarm and anger.3 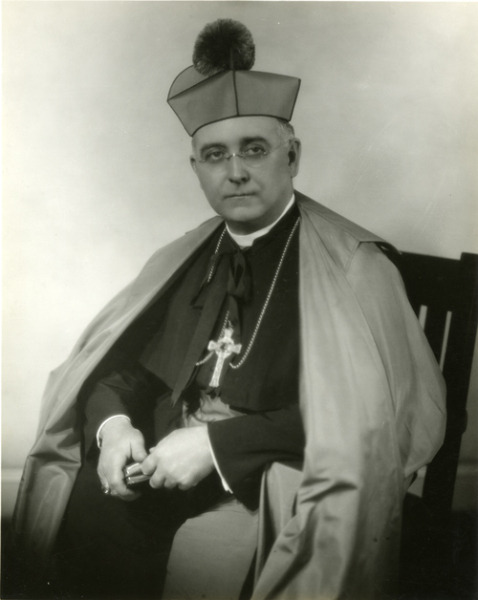 Like other Americans, Catholics in the U.S. were shocked when they learned of the violence being committed against Germany's Jews. It offended their sense of Christian love and tolerance, religious freedom, individual rights and basic human dignity. Catholics, however, did view the persecution of the Jews in 1938 slightly differently than those of other faiths, as their culture, while American, had its distinct aspects. By 1938 there were over 20 million Catholics in the American Church. They were concentrated largely in cities, where they had created networks of parishes, schools, colleges, orphanages, seminaries, and hospitals. 4 Persistent anti-Catholicism often meant that Catholics of a range of classes and ethnic origins felt less comfortable in public institutions than within their own. It also meant, however, that the U.S. Catholic Church, while managed by a predominantly Irish- and German-American hierarchy, was ethnically diverse. Hence, Catholics cultivated a sense of respect for ethnic diversity, necessitated in part by the church's inner variety and in part because it was an American ideal.

American Catholics, however, also drew on other practices embedded within both their religious and national traditions. Anti-Judaism-theological opposition to Judaism-had been present in Catholic theology and culture from its earliest days, as several scholars have shown. Catholic anti-Judaism informed the emergence of racial anti-Semitism-the race-based hostility toward Jews practiced by the Nazis.5 Anti-Semitism was and is also American. As the historian David Gerber notes, because the American political system emphasizes ideals of religious liberty and individual expression, anti-Semitism usually remains "ordinary," practiced privately and generally without government sanction on an every day level, in social, economic, and educational institutions, through random verbal and physical harassment, and through the promotion of negative stereotypes in art and media. 6 While less intense and consequential than in Nazi Germany, then, anti-Semitism was nonetheless alive and well in the United States, particularly in the 1930s. The mid-to-late 1930s was a period in which "extra-ordinary anti-Semitism" threatened to become the basis of a mass political movement in the United States. This anti-Semitism blamed Jews for the Great Depression and had strong anti-Communist elements-indeed many of these anti-Semites admired Adolf Hitler and detested Stalin's Soviet Union, fearing its atheism would spread to other parts of the world. 7

This combination of influences and beliefs led American Catholics to their own views on international affairs, as the materials here reveal. For the vast majority of Catholics of the 1930s, being an American Catholic meant being anti-Communist in no uncertain terms. Global events reinforced Catholic anti-Communism. The Spanish Civil War of 1936-1939, widely reported in the U.S. Catholic press, generated intense anti-Communist feeling among U.S. Catholics. Violence against Catholics in Mexico, too, received heavy coverage in the U.S. Catholic press. In both cases, Catholics were victims of atrocities committed by forces associated with socialism and communism. These circumstances caused some Catholics to sympathize with fascists (Concordats had been reached between the Vatican and Fascist Italy in 1929 and Fascist Germany in 1933), who, at least initially, were more supportive of Catholic institutions than were communists or socialists. American Catholic outrage against anti-Catholic socialist reforms in Mexico, and approval of the concordats in Italy and Germany, as historian John McGreevy points out, was in part an expression of their belief that Catholic religious liberties should be protected. 8 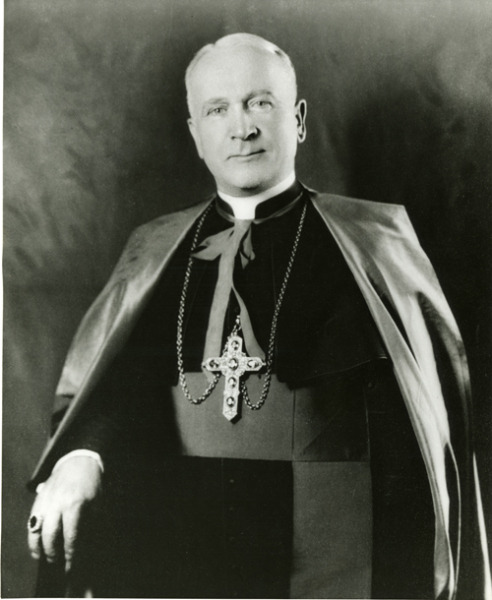 The primary materials on this site reveal that American Catholics were influenced by all of these elements in their reaction to the Nazis and the Kristallnacht pogrom. On the one hand, some drew from an American Catholicism that saw Judaism and Catholicism as part of a single tradition and emphasized that Jews should be able to live and worship freely. On the other hand, some Catholics emphasized an American Catholicism that saw Judaism and Catholicism as completely distinct, and that a supposed Jewish Communist conspiracy made Jews legitimate targets of the Nazis. The Catholic University broadcast represents the more inclusive view, while the Father Charles Coughlin broadcast expresses the more exclusionary view of Jews. Both make numerous references to the persecutions of Catholics elsewhere in the world in their reactions to the Kristallnacht pogrom.

The Catholic University broadcast, delivered on November 16, 1938, was organized by Father Maurice Sheehy, Assistant Professor in the Department of Religious Education at Catholic University and assistant to the Catholic University rector. Sheehy was an adept organizer who managed the university radio station, possessed many contacts within the church, in the Washington, D.C. community, and in national politics. Sheehy gave the first address of the 27 minute broadcast, which was carried by the Columbia Broadcasting System (CBS) and the National Broadcasting Company (NBC) radio networks. Sheehy was joined in the broadcast by Archbishop John J. Mitty of San Francisco, California; Bishop John M. Gannon of Erie, Pennsylvania; Bishop Peter L. Ireton of Richmond, Virginia; former Democratic Presidential Candidate and Governor of New York, Alfred E. Smith, and Catholic University Rector, Monsignor Joseph M. Corrigan. The participants were selected to represent both lay Catholics (hence Smith's inclusion) and clerical leaders' unified view that the violence unleashed on Jews and Jewish property in Germany was immoral, contrary to Christian teaching and against American ideas of religious and civic freedom. They also compared the treatment of the Jews by the Germans to the persecutions of Catholics in Spain and Mexico. 9

Four days later, Father Charles Coughlin, the hugely popular Catholic "radio priest" from Michigan, went on the air to deliver a broadcast titled "Persecution - Jewish and Christian." Claiming he would add his voice to those protesting the brutal Nazi pogrom against Germany's Jewish population of several days earlier, Coughlin instead offered a justification of the Nazi persecutions as a natural defense against an alleged Jewish-dominated communist movement. Coughlin also mocked the Catholic University-sponsored address of Archbishop John J. Mitty, referring to him sarcastically as the "Most intellectual Archbishop" and suggesting that the CUA broadcast participants cared more about the persecution of Jews than Catholics. 10

The reactions to both broadcasts was substantial and intense, with hundreds of stories appearing in the media on each. Generally, the reports on the Catholic University broadcast were very positive, while those on Father Coughlin's address were generally negative. We include on this site the multi-page correspondence between CUA Rector and anti-Nazi broadcast participant Fr. Joseph Corrigan and Irving Sherman, a Jewish man concerned with the increasing anti-Semitism of Father Coughlin. The letters, which span November 1938 to September 1939, offer insights into the personal views of the two men on the anti-Nazi-Broadcast, anti-Semitism, Father Coughlin, and the role of the Catholic Church with respect to anti-Semitism among its clergy in the late 1930s.