"The Autobiography of Mother Jones"

While child labor was never far from the mind of Mother Jones, she was busy with other tasks for several years with the United Mine Workers of America (UMWA).  When she attempted to organize miners in West Virginia in 1902, she was arrested, though not sentenced to jail time.  At that point Jones left West Virginia to focus her attention on textile workers in Philadelphia who were striking for a reduction in working hours. Of the thousands who went out on strike, a significant number were children. In July 1903, Jones came to support the strikers, particularly the children. The situation afforded Jones the opportunity to focus once again on the child labor issue, and she decided to take full advantage. She planned a march of mill children from Philadelphia to New York City in order to highlight the problem with the general public, and also to show New York financiers and business owners what their corporations were doing to the children. 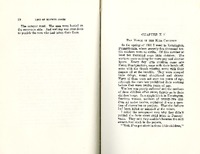 Excerpt from "The Autobiography of Mother Jones"

Beginning in early July, the so-called “March of the Mill Children” would take three weeks to complete, with marchers arriving in Manhattan on July 23. The parade began with approximately 100 children, as well as a number of adults to assist them. The numbers would wax and wane throughout--Jones’ biographer Elliott Gorn writes that about 60 children would march through New York. On the way to the city, Jones began to contemplate attracting the attention of President Theodore Roosevelt, whose home was in New York. She wrote an open letter to Roosevelt, which was published in several newspapers, seeking an audience with him and asking him to champion child labor legislation. Roosevelt did not respond, prompting Jones to take a handful of children and go to his home to seek an answer face-to-face. The group was met by Roosevelt’s personal secretary Benjamin Barnes, who said that while they could not see the President, they could address their concerns to him by letter (click here to see that article). Though Jones did so, Gorn writes that no evidence exists that Roosevelt ever read it. In the end, the strike was ended and all, including children, went back to work. No labor laws were passed, no relief was given, and Jones soon went to support the Colorado coal mine strikes.

Though no concrete measures came from the march, the attention of the country focused, even if only for a short time, on the child labor issue. In ensuing years, numerous attempts were made to end the practice, but the breakthrough legislation did not occur until 1938 during the Great Depression, when another Roosevelt, this time President Franklin D. Roosevelt, signed the federal Fair Labor Standards Act, which effectively stopped most forms of child labor (with the exception of agricultural work). The “March of the Mill Children” was perhaps the first significant salvo in the battle against child labor.

As you read this document, reflect on the following questions:

1. In her Autobiography, what reasons does Jones’ give in getting involved in the textile strike? Prior to the march, how did she highlight the problem?

2. What did Jones and the marchers hope to gain from writing to and/or meeting with Roosevelt?

3. What did Jones believe she had accomplished with the march?

← "Civilization in Southern Mills"
Next Page: