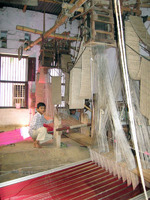 Child Labor, Now and Then

The average American believes that child labor issues are a relic of the past, an issue that was resolved in the early 20th century. While that may be true for the most part in the U.S., other countries still struggle with the problem of minor children being engaged in hard labor. In the latest report on child labor by the International Labour Organization's International Programme on the Elimination of Child Labour, approximately 168 million children between the ages of 5 and 17 were engaged in labor in 2012, down 22 percent from 2008. Of that group, just over 85 million were engaged in hazardous work, down 26 percent from 2008 (click here for more information). The ILO defines child labor as "work that deprives children of their childhood, their potential and their dignity, and that is harmful to physical and mental development" (further information can be found here). In the U.S., federal law prohibits youths under the age of 14 from working in most areas, and those ages 14-15 are banned from industrial work. Youths ages 16-17 are banned from jobs deemed hazardous by the U.S. Department of Labor. While the numbers of laboring youth have dropped around the world in these age groups, statistics still prove that child labor continues to be a problem in many countries. It is a problem that labor organizer Mary Harris "Mother" Jones hoped 110 years ago would be ended for good at some point in the near future.

So these statistics bring up the question: What would Mother Jones think?

In 1903, approximately 100,000 textile workers in Philadelphia went on strike, including 16,000 children. Workers were seeking increased wages and a reduction in the work week.  Mother Jones arrived approximately two weeks after the start of the strike, but was unable to generate much attention. Sensing an opportunity, she decided to hold a march of children to highlight child labor issues as well as the strike in July. One hundred children would march from Philadelphia to New York City carrying signs that carried messages of less hours and a desire to attend school. By the time the march ended three weeks later, though, little of the hoped for gains were met. Jones failed in an attempt to meet with President Theodore Roosevelt, who had a home in New York, and he answered none of the three letters she addressed to him. Child labor issues were not changed, either, and in fact, the strike was broken and the workers returned to their jobs.

However, in her Autobiography, Jones did believe that the issue of child labor had at least been raised in the mind of the public. This march may have been the first salvo in the battle to end the practice, which finally occurred in 1938 when President Franklin D. Roosevelt signed the Fair Labor Standards Act into law. If nothing else, Mother Jones had started the public dialogue on children in the labor force.

For more on Mother Jones, click here to see the main site on her.