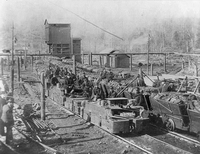 The United Mine Workers of America made significant gains across the country by 1900, with membership standing at approximately 91,000 in 931 locals by the first of the year, according to the union's convention proceedings. However, the union had little success in West Virginia, which, according to the 1900 proceedings, had only 15 locals and 421 members. UMWA leaders made another attempt at unionizing there in late 1900, and Jones, along with others, went there to rally support among the workers.

West Virginia was one of the largest coal producing states in the U.S. in an industry that was the life-blood of the country’s industrial growth, but this did not translate into good conditions for the industry's workers. Deaths in the mines were frequent, pay was low, and the mining companies controlled everything from stores to local politicians. 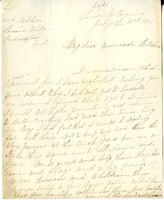 Into this situation marched the 64-year-old (71, by her account) little woman, who crisscrossed the state to rally support for unionization. She entered the mining camps and walking along the mountain sides to speak to those she termed “her boys.” In a series of letters between herself and UMWA President John Mitchell, Jones described her travels and work, mentioning in her letter of July 31 that she and others were “up the mountain at S Caperton last night and came down the goat path after 12 o’clock  I had to slide down most of it. My bones are all sore today …. The Ill boys (organizers from Illinois) are good hard workers but they are beginning to realize this is not the smoothest field in the country to work in.” Mitchell responded by acknowledging the difficulties in West Virginia, but feared anything less than full organization in the state could prove disasterous for wage negotiations. 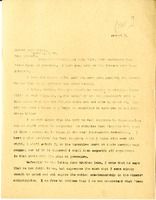 Jones would also mention a standoff with mine operator John Lang (later head of the West Virginia Department of Mines), who said she could not speak at the Red Ash mine. Jones said she would and that “he could bring Sheriff Judge and Jury.” Lang, according to Jones, would not show up. Whether this story was true or an exaggerated part of the Mother Jones legend is not absolutely certain; however, it does bring to light how much time and energy Jones put into her work and her passion for the coal miners. 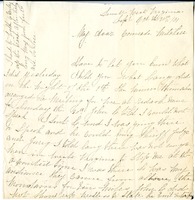 1. What do the letters appear to reveal about Jones’ hands-on approach to organizing?