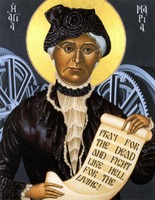 Mother Jones had a complicated relationship with religion. She was of Irish Catholic descent and had at least some connection to the Church in Toronto. She claims in her Autobiography that she attended “common schools” when she was young, apparently her terminology for public schools, which may or may not be true since most Catholic families would have sent their children to parochial schools, according to biographer Elliott Gorn. She taught at a Catholic school in Michigan for a short time as well. However, this appears to be the end of any formal association with the Catholic Church. While her family appears to have stayed close to religion, particularly her brother William Richard Harris, who would serve as a priest in the Toronto area for approximately 50 years, Jones chose the “religion” of labor instead.

It should be noted that Jones seemed to retain at least some rudimentary Christian faith, often mixing in allusions to Christ in her speeches and correspondence. However, at the same time, she ridiculed clergy as “sky pilots,” and encouraged workers to look to themselves for help and not to Christ. The two letters presented here show some of Jones’ full wrath against religious leaders. In the 1913 letter, she attacks Bishop Patrick Donahue of the Diocese of Wheeling, West Virginia, for associating with mine operators. She saved her harshest critiques, though, for the sisters and priest at a Catholic hospital in Trinidad, Colorado, where she was held following her arrest (click here for more on this arrest). Jones lambasted the clergy there for allowing their hospital to be used “as a military prison. I never saw more moral cowards in my life than those sisters were. It is a sais [sic] comment [sic] on a religuous [sic] institution. They are simply owned body and soul by the Rockefeller interests. The priest would go by my window in the morning and take his hat off to the uniform murder and not notice a poor wretch who was digging in the garden with his legs off. How they have prostituted Christ’s holy doctrine.”

1. Why did Jones criticize Bishop Donahue in her 1913 letter?

2. Considering her comments on the religious leaders in Trinidad and based on her work, what would Jones consider to be the true purpose of religion?