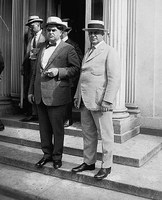 As the 1910s drew to a close and she passed the age of 80, Jones began to contemplate her own mortality as well as the future of the movement to which she had now given approximately 30 years of her life.

Her worries may not have been unfounded, as internal turmoil plagued the United Mine Workers of America. Financial woes within the union, as well as struggles for leadership, led Jones to try to play peacemaker in order to focus the organization on its primary purpose of helping the average worker. Between 1917 and 1920, two of the union’s presidents, John P. White and then Frank Hayes, both of whom were supporters of Jones, resigned and in their place stepped the legendary leader of the United Mine Workers, John L. Lewis, who would serve as president for 40 years. 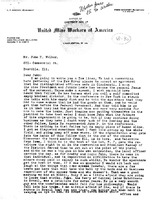 Jones did not have a warm relationship with Lewis. In the letter presented here from Jones to John Walker, president of the Illinois State Federation of Labor and a three-time candidate for president of the UMWA, she minced no words on her feelings for Lewis. “There is nothing in that fellow but an empty piece of human slime. I get so disgusted sometimes that I feel like giving up the whole field and going away off somewhere. If the organization ever gets into the hands of this fellow that is the end of the miners.” Biographer Elliott Gorn writes that Lewis was everything Jones hated in a union official: He never spent time with the miners and wanted power above all things.

1. In her letter to Powderly, what is Jones' greatest lament about the labor movement?

2. In her letter to Walker, how does Jones view the future of the labor movement during and after World War I?

Proceedings of the 1922 UMWA Convention →