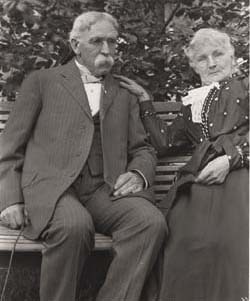 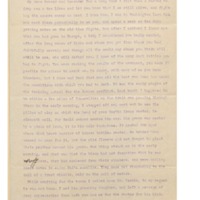 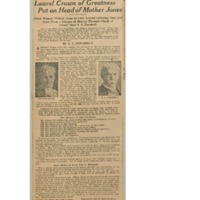 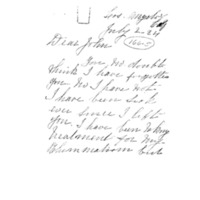 Throughout her hectic life, there seemed to be few constants in the life of Mary Jones, particularly when it came to relationships with people. After the death of her husband and children in the 1860s, she never remarried. She rarely stayed in one place for any significant length of time, moving from camp-to-camp in West Virginia, Colorado, and Pennsylvania, offering little time to establish long-lasting relationships. She made great allies within organizations and even became close to several of them, such as John Mitchell of the United Mine Workers of America and John H. Walker of the Illinois Federation of Labor.

One constant, however, was her 30-plus year friendship with Terence V. Powderly. A native of Pennsylvania, Powderly served in several in political offices, such as mayor of Scranton, Pennsylvania, and with the U.S. Bureau of Immigration from 1897 until 1921. However, Powderly is best known for, and established his relationship with Jones as, head of the Knights of Labor from 1879 until 1893. Although details are sketchy as to when Jones became part of the KOL (click here for more on this topic), she certainly was within the organization during Powderly’s term as Grand Master Workman. From then on, the two became close friends, writing each other numerous times over the next 30 or more years. This friendship was unusual, if not surprising, given that the two often differed in thought and tactics. Powderly tended to be more conservative, preferring to work through the political process to achieve gains for workers, while Jones eschewed politics for a hands-on, in-the-camps approach.

In numerous letters, Jones told of her work in the field to Powderly, and often offered encouragement to her friend, crediting him for being one of the most important figures in the labor movement. Jones became close to Powderly’s wife, Emma, as well. Jones, in fact, often looked on Powderly as a surrogate son, addressing at least one letter to him as “my own dear son” (despite the fact that there was only about a 12 year difference in their age), and at other times as “My dear friend.” In 1922, Jones became gravely ill and the Powderlys took her into their home in Washington, D.C., a place she would consider home for the next five years.

When Powderly died in 1924, Jones lamented to Illinois Federation of Labor head John Walker, “Well John the one faithfull friend I had for the last 45 years has passed away  Terence V. Powderly   he fought my battles for years he faced all the Slanders & boldly Deffended me.”

1. What do these items reveal about the relationship between Jones and Powderly?