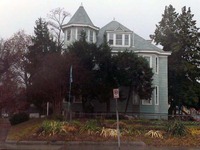 With her work severely curtailed by the early-to-mid-1920s, Jones began work on her autobiography in 1923.  With the assistance of editor Mary Field Parton, Jones wrote mostly about her years working in the labor movement, almost totally eliminating any personal information save for approximately two pages at the very beginning (click here for more on early life in The Autobiography of Mother Jones). Published in 1925, The Autobiography of Mother Jones was mostly a commercial failure, writes biographer Elliot Gorn, adding that with the exception of hardline labor supporters, Jones was on the verge of being forgotten.

By this time, Jones had settled into a more tranquil setting. In 1922, Jones, who was ill at the time, went to live with Terence and Emma Powderly at their home in Washington, D.C., staying there even after Terence died in 1924. Jones moved into the home of long-time friends Walter and Lillie May Burgess in Hyattsville, Maryland in 1929, after Emma Powderly's health declined to the point that she could no longer care for her guest. 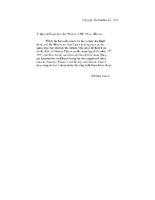 Mother Jones to the Miners of

In preparation for the inevitable, Jones wrote to the caretakers of the Mt. Olive, Illinois, Union Miners Cemetery in 1923 requesting a burial plot there for herself so as to be near some of the men she had supported during her lifetime (click here to see the original letter). "I hope it will be my consolation when I pass away to feel I sleep under the clay with those brave boys," she wrote in her letter. The request was granted.

Jones was still with the Burgesses when a celebration of her purported 100th birthday was held on May 1, 1930. Frail in health, Jones was still able to accept the well-wishes of many long-time friends and admirers, and her fiery personality had not been extinguished. When someone attempted to pin a corsage on her for the occasion, Jones, according to the news article presented here, testily said, "Hell, I never have worn those and I don't want to now." She also took the opportunity to condemn Prohibition.

1. Why did Jones' request to be buried in the miners' cemetery?

2. What attitudes did Jones' show on her "100th birthday" toward Prohibition and women?

← Proceedings of the 1922 UMWA Convention
Next Page: