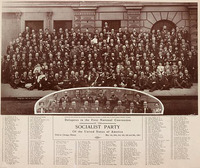 In late 1903, Jones went to Colorado to assist in what turned out to be a year-long strike in the coal mines there. Working in her official capacity as an organizer, Jones criss-crossed the state supporting a strike that the United Mine Workers of America's national office was reluctant to fully endorse. By mid-1904, without the support of the national union, the local strike ended, though some pockets of support would last until October. With her relationship to the UMWA already strained due to its lack of support for the Colorado strike, Jones was further alienated when the leadership told her to end any association with radical labor groups. Infuriated, Jones completed the separation between herself and the UMWA in late 1904, turning down a reappointment as an organizer. In her letter here to fellow organizer John Walker, Jones writes that she "will fight the cause of the miners anyway, whether I am directly in their service or not." 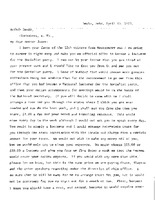 Instead, Jones decided to accept a position that had actually been offered to her nearly two year before. In April 1903, William Mailly, national secretary for the Socialist Party of America, wrote to Jones asking if she was interested in becoming a paid lecturer for the Party. Though she initially turned it down due to her work with the UMWA at the time, her frustration with the union in 1904-05 led her to reconsider and accept Mailly’s offer. That Jones became involved in the Socialist Party is not surprising. Biographer Elliott Gorn wrote that socialist ideology had been part of Jones’ rhetoric for several years. Though Jones became disillusioned with the Party over ideological differences, she remained with it for six years. 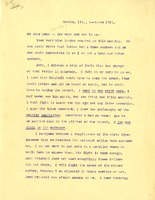 1. According to this letter, what reasons did Mailly have for offering a speaker's position to Jones?

2. Despite her resignation from the UMWA, what were Jones' thoughts on John Mitchell in her letter to Walker?