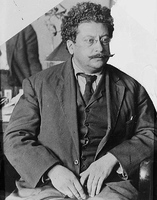 Over the next six to seven years, Jones became involved in numerous causes in addition to her work with the Socialist Party. One such cause was that of the Mexican labor movement, leaders of which she lauded for their support of the strike in Colorado. One of the major groups that Jones became a supporter of was the Partido Liberal Mexicano (PLM), one of several organizations opposed to capitalist expansion in Mexico.

In July 1907, PLM leader Manuel Sarabia was arrested in Arizona and taken back to Mexico, where he was released. However, he and three others (Ricardo Magon, Antonio Villarreal, and Librado Rivera) were indicted in U.S. District Court in Arizona on conspiracy charges. They were accused of attempting to overthrow the government of Mexican president Porfino Diaz from American soil. Jones immediately went to the defense of the men, attempting to raise money for them from 1907-1910 and even addressing the United Mine Workers of America convention in 1909 for the first time in many years as she sought their freedom.

In the short term, Jones' efforts were unsuccessful, as the men were convicted in November 1909 and sentenced to 18 months in prison. However, the men were released in August 1910, having spent most of the past three years incarcerated. In the letter presented here, Magon, Villarreal, and Rivera write to Jones asking her to peruse some documents regarding their case and to do “everything in your power to ful-fill those of our recommendations you consider practicable and well founded.” They praise her as great example to humanity and for her assistance to Mexican “slaves.”

1. What kind of impact do Magon and his compatriots expect from the assistance of Jones, both in their current plight and in the overall fight for Mexican workers?