Mother and "Her Boys"

Mary Harris Jones was labeled many things during her during her long life. She even labeled herself when a speaker once introduced her as a humanitarian. "Get it straight, I'm not a humanitarian, I'm a hell-raiser."[1] One name in particular stuck, however, and she embraced it throughout her life: "Mother."

“Mother” Jones caused much dissension during her roughly 100 years of life (the exact date of her birth has been a topic of debate), and her legacy is still debated today. Many historians downplay her contributions to the early labor movement as inconsequential, though she is given some credit for her work between the mid-1890s and the late 1920s on behalf of laborers, and particularly coal miners.  However, to those who lived during her time, she was often the very face of the labor movement.  Politicians, industrialists, and mine owners she opposed saw her as a rabble-rouser and a threat to their interests.  Miners, their families, and sympathetic members of the labor movement saw her as a champion of their cause, this grandmotherly woman who cared about the average laborer and made it publicly known in the strongest terms possible.  Newspapers made room on their pages for her exploits; congressional leaders heard her testimony in hearings on Capitol Hill; unions invited her to speak at their conventions; the burgeoning Socialist Party counted her as a member and organizer. She was jailed, banned from a town in Colorado, faced down armed guards in West Virginia, challenged governors and union leaders, led a march to protest child labor, gained the respect of labor leaders in other countries, and became a forceful organizer for miner unions.  Indeed, Mother Jones is a potent symbol of the early twentieth century labor movement and motivated laborers through her symbolic status as an outspoken and fearless champion of the worker. 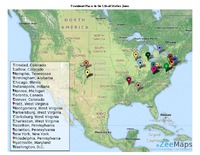 The Life of Mother Jones Mapped

The Elusive Past of a Legend

We know about Mother Jones' activism from about 1900 to 1930, but very little is known of her earlier life, which is shrouded in mystery due to a lack of available historical evidence related to her first six decades.  For example, while Jones maintained until her death that she was born in 1830 in Ireland, only the second part of this claim appears to be true. Recent scholarship pinpoints 1837 as the most likely year of her birth. Her autobiography, published in 1925, contains approximately three pages that cover her birth, migration to Canada and the U.S., move to Memphis, Tennessee, marriage,  death of her husband and children, and subsequent relocation to Chicago. The remainder of the book focuses on her role in the labor movement. Aside from this autobiography (which her biographer Elliott J. Gorn notes has many factual problems), a relatively small amount of surviving correspondence, and newspaper articles, we are left with little information on Jones, especially her life before 1900.

Indeed, Jones' personal history as an Irish immigrant to the U.S. sits uneasily with her status as a legendary labor hero.  Her autobiography seems constructed to promote the labor hero rather than reveal the life of the woman--more a tale of Mother Jones than Mary Jones.  While there is no doubt that Jones led an adventurous life in her work with the labor movement, there are several instances in which these adventures (whether by faulty memory, accidental overstatement, or outright deception) are inflated beyond fact. Did Jones really put her hand on a mine guard’s machine gun and shame the guards into backing down? Was her actual birthdate May 1 (May Day & International Workers' Day)? Did she really become involved with the Knights of Labor at an early date? These questions are part of the problem in finding the real Jones, though Gorn also argues that such exaggerations may have also worked in her favor in bringing more people into unions.

Finally, there is the question of how successful Jones was in her efforts. While her presence and courage were a constant inspiration to many laborers both during her life and after her death, her more concrete and practical successes were less apparent. Despite bringing many miners into unions, many other times the miner operators would crush strikes or wait out the union insurgency until it lost steam. As Gorn notes, “In a narrow sense, her accomplishments were limited. She lost more industrial battles than she won, and the United Mine Workers failed to organize the entire coal industry.”[2]In addition, her influence had begun to wane in the 1920s, as powerful union leaders began to gravitate more to the political aspects of the labor movement than to marshalling the energies of its rank and file, as Mother Jones had done so well.  As the labor movement changed in emphasis, according to Gorn, Jones' memory faded.[3] 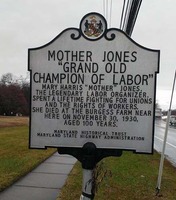 Jones has resurfaced in the past 40 years or so as an icon of the supporters of radical change in American society, beginning in the 1960s. By 1976, the progressive magazine Mother Jones had appeared, books that included her correspondence and speeches were released, and several biographies have also appeared, seemingly culminating with Gorn’s work that offers possibly the most authoritative look at Jones’ life to date.

The purpose of this exhibit is to present documents related to the life and work of Jones. The site includes letters, speeches, newspaper clippings, and other material that attempt to re-construct her life for those unfamiliar with this remarkable woman.