American Catholic History Classroom > Exhibits > An African-American President in 1976? > "Pettigrew for President" > About the Series 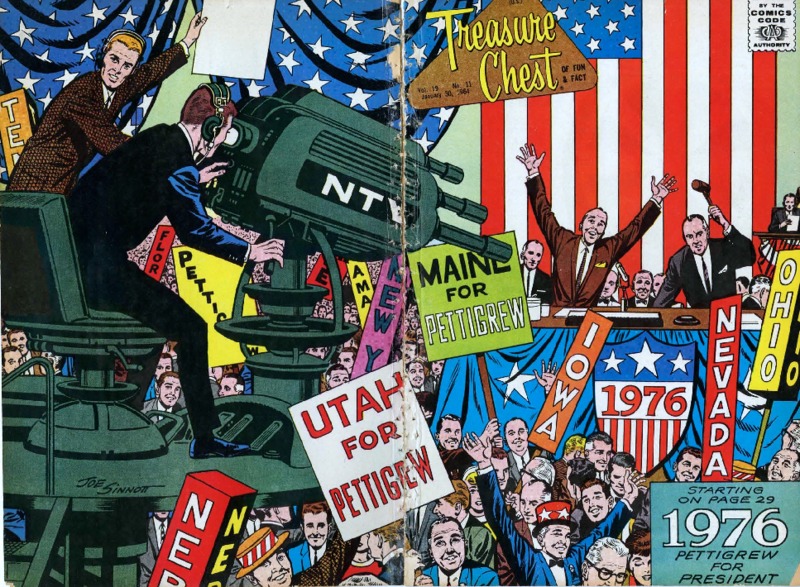 Throughout all ten issues, Tim Pettigrew's face was carefully hidden, so that readers would learn to judge the candidate on the basis of his intelligence, his charm, and his ideas, rather than on his race. Because violence, hate, and division had colored the entire history of race relations in the United States, the mere suggestion of a black presidential candidate was considered revolutionary in 1964. Segregation was still a compelling force in the South, and even the North experienced rampant racism. Most black Americans still had to fight for the right to register to vote - let alone run for the highest office in the nation!

The publication of the "Pettigrew for President" series during the spring of 1964 coincided with several major events in American history. President Kennedy had been assassinated on November 22, 1963; Lyndon Johnson succeeded him as president, and one of his first priorities was to push Kennedy's Civil Rights Act through Congress. Signed into law on July 2, 1964, the legislation outlawed segregation in schools, public places, and employment. It was followed in 1965 by the Voting Rights Act, which outlawed discrimination in voter registration and helped ensure equal access to enfranchisement. These events provide the background against which the series was set: an America struggling to overcome bigotry and hatred, divided by questions of race, startled by a generation that embraced protest and civil disobedience. While many Catholic school children might have been personally untouched by the effects of segregation, most of them were aware of the struggle for racial equality going on around them.

Although the Treasure Chest ceased publication in 1972, the legacy of the Pettigrew for President story has endured. In 2008, Reece's vision of a black presidential candidate was finally fulfilled - and that candidate also won the election. Barack Obama's presidential campaign and electoral victory reminded some fomer Catholic school students of the story of Tim Pettigrew which they had once read in school, and interest in the more than forty-year-old series has grown. Presented here in digitized format is the complete, original "Pettigrew for President" series.

← "Pettigrew for President"
Next Page: