American Catholic History Classroom > Exhibits > The Catholic Church, Bishops, and Race in the Mid-20th Century > Documents > "Catholics and the NAACP"

"Catholics and the NAACP" 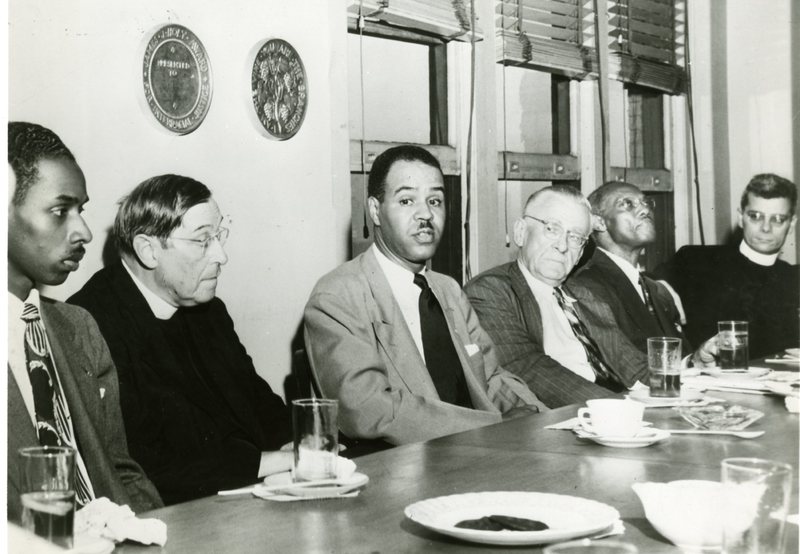 Founded in 1909, the National Association for the Advancement of Colored People (NAACP) became a flagship organization for promoting the civil rights of African Americans. The organization became vocal in its opposition to Jim Crow laws, seeking to overturn such segregationist policies in the general public as well as within school systems. Due to its activities, the NAACP consistently was the target of racist individuals and organizations that felt threatened by the organization’s demands for equality. Members often faced retaliation in various forms, and the organization was effectively barred from Alabama after its involvement with the Montgomery bus boycotts in 1956. 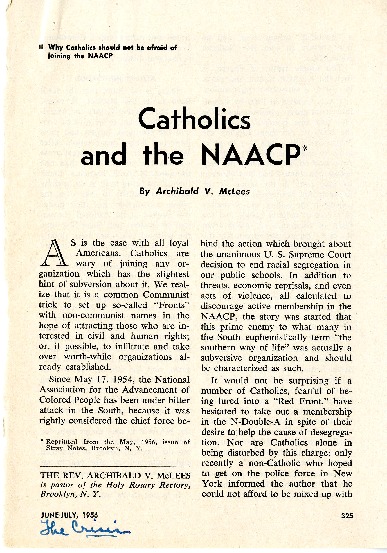 "Catholics and the NAACP"
Courtesy of ACUA

The NAACP, along with other civil rights organizations and individuals, were often described as being “Communists” by those who opposed them. The power of that term in 1950s America was not lost on Catholics, whom Rev. Archibald McLees of Holy Rosary Rectory in New York described as “wary of joining any organization which has the slightest hint of subversion about it.” However, McLees, in a 1956 article written in the NAACP journal The Crisis, sought to assuage Catholic fears of the civil rights organization by arguing that it was not a “subversive organization,” and that it had been “doubly vigilant in seeing that leftist activity is kept out of the individual branches.” He went on to encourage Catholics to join the NAACP, asking, in essence, “Why WOULDN’T we join the NAACP?”

What reasons does McLees give for Catholic to take part in the NAACP?

Articles on Little Rock segregation; “An Elementary Catholic Catechism on the Morality of Segregation and Discrimination” →