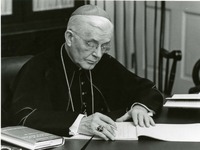 The year 1963 was one of great racial unrest, as well for calls for change, in the United States. In Birmingham, Al., segregation protestors were attacked by police and members of the general public, and later the 16th Street Baptist Church there is bombed, taking the lives of four young girls. Civil rights activist Medger Evers was assassinated in Mississippi, and Alabama Gov. George Wallace “stood in the schoolhouse door” at the University of Alabama. Civil rights leaders instituted the March on Washington, where Dr. Martin Luther King Jr. delivered his “I Have A Dream” speech.

In the midst of the chaos, the National Catholic Welfare Conference elected to issue a pastoral letter titled “On Racial Harmony” in August 1963 to U.S. Catholics regarding the events of the time and the Church’s response. Reaffirming the statement they issued in 1958, the bishops stated that Christian charity can be shown “by a quiet and courageous determination to make the quest for racial harmony a matter of personal involvement.” The leaders called for open discussions between races in order to better understand the concerns of each group, and encouraged Catholics to open these lines of discussion in their local spheres of influence. As with all statements produced by the national gathering of leaders, the letter placed great stress on love for one another and the inherent equality of all men due to their creation by God. 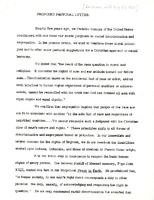 "On Racial Harmony"
Courtesy of ACUA

This would not be the only statement that year made by a Church leader. In March, Archbishop Lawrence J. Shehan of Baltimore issued the pastoral letter “On Racial Justice, echoing previous statements that affirmed the equality of all men due to their creation by God. Shehan stated that segregation had no place in churches, parochial schools, diocesan organizations, and hospitals. He also argued that justice was a personal responsibility for every Catholic in every aspect of life, from neighborhoods to work places, and encouraged his membership to “face boldly and confidently the task that is before us, certain that with God’s help we shall achieve in the Church of this archdiocese a holy unity, free from all stain of prejudice and from every defect of division or discrimination.”

"On Racial Justice"
Courtesy of ACUA

These statements made by the U.S. bishops as a group and by Shehan on his own represent only two of several statements on racial issues that would be made by Catholic leaders in the nation during 1963, but it perhaps had the most power due to it being the statement from the Church’s body of leaders, as well as one from the nation’s first see.

1. What suggestions are made by the bishops to improve understanding between races?

2. How does Shehan’s pastoral letter compare/contrast with those of Rummel and Hallinan?