American Catholic History Classroom > Exhibits > The Catholic Church, Bishops, and Race in the Mid-20th Century > Documents > "Why Did You Go To Selma?" 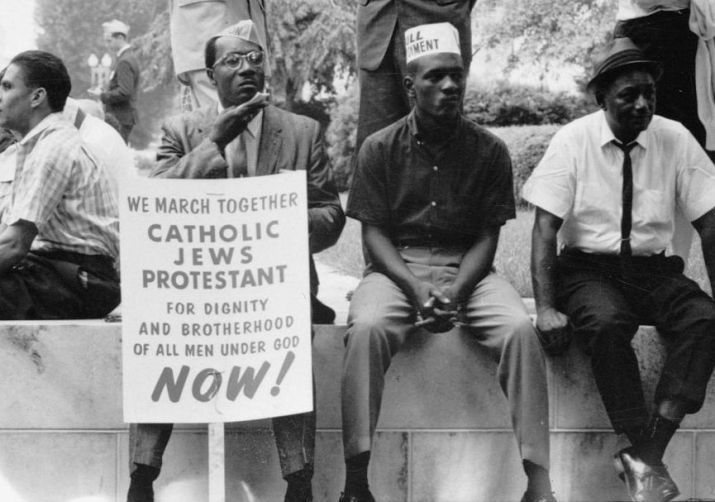 Demonstrators during
Selma-to-Montgomery March
Courtesy of Library of Congress

If Congress and religious leaders expected instant change following the passage of the Civil Rights Act of 1964, there were sadly mistaken. The law did little to ease discrimination, particularly in the Deep South, and activists continued to protest such discriminatory activities. Among the best known of these protests was the 1965 march of protestors from Selma, Alabama, to the state capital in Montgomery. The event actually covers three different protest attempts. The first, held March 7 in response to the shooting death of an African American in Perry County, Alabama, is now notoriously known as “Bloody Sunday,” wherein law enforcement officials violently turned back the march as it crossed a bridge in Selma. Two days later, the Rev. Martin Luther King Jr. and others led another attempt, but turned back when troopers on the bridge blocked them according to a court order. Finally, on March 21, the court order prohibiting the march was lifted, and close to 8,000 marched from Selma to Montgomery, where King spoke on the steps of the Alabama State Capitol building. 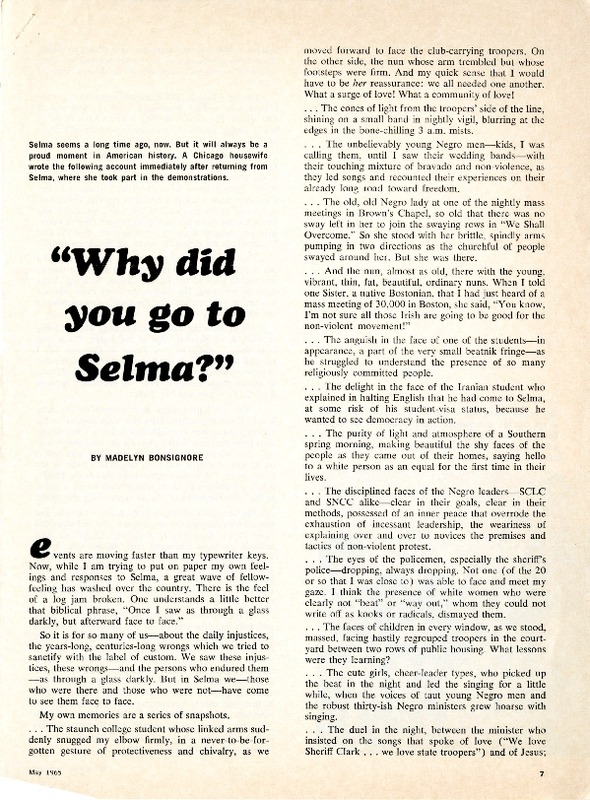 "Why Did You Go to Selma?"
Courtesy of ACUA

Among the protestors in the march were numerous religious leaders, including a number of priests and nuns, and several members of Catholic churches from across the country. One of the latter was Madelyn Bonsignore, a housewife from Chicago who traveled to Selma to take part in the protests. Bonsignore wrote an article on her experiences for the Catholic magazine St. Anthony Messenger soon after returning from Alabama. Speaking of her memories of the marches and why she went to Selma, Bonsignore wrote that more Catholics besides Church leaders needed to take part in the marches, and that she went “because I truly believe that we are the people of God, that each one of us must be the Church, and that some of us must be the Church in Selma.” The article had admiring reminiscences of a college student she walked arm-in-arm with against state troopers, nuns taking up the cause, and the African American Protestants who stood firmly for their beliefs.

Bonsignore’s article and presence in Selma were physical proof that it was not only the Church leaders who were moved to advance the cause of civil rights. The combined convictions of leaders and members were a powerful front against injustice.

Why was it important for lay persons such as Bonsignore to become involved in the civil rights movement instead of just clergy?

“On Race Relations and Poverty”; Letter of Matthew Ahmann to Bishop Paul Tanner →