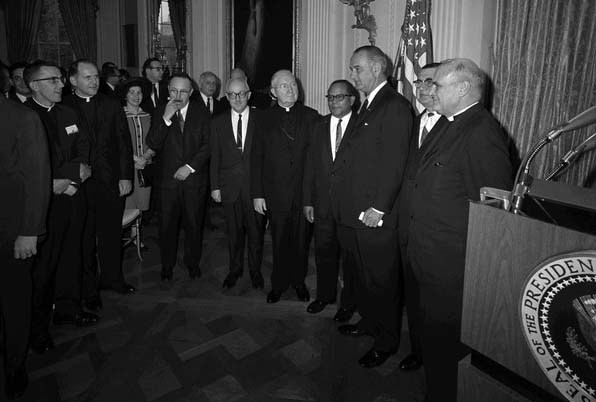 In late April 1964, the U.S. Senate had been debating the passage of a civil rights bill for approximately one month. The bill had been championed by President John F. Kennedy prior to his assassination in November 1963, and his successor, President Lyndon Johnson, continued to fervently support the measure. The bill was opposed by many Southern Democrats, who doggedly filibustered the bill for approximately two months.

In the midst of the debate, religious leaders from across the country gathered for the Inter-religious Convocation on Civil Rights, held April 28 at Georgetown University. Catholic, Protestant, and Jewish leaders, following up on the National Conference on Religion and Race that had been held the year before, gathered as a show of unity on the topic of racial equality and to urge Congress to pass the civil rights legislation.

Archbishop (later Cardinal) Patrick O’Boyle of Washington, D.C. served as chair of the event, giving the invocation and providing the opening remarks. In his prayer, O’Boyle stated that “There is in every man a priceless dignity which is your heritage. From this dignity flow the rights of man, and the duty in justice that all must respect and honor these rights,” and asked that God would cause the legislators to pass the civil rights bill. In his remarks, he urged the Congress to pass the bill and those present to “tell our Representatives our conviction that such a law is a moral obligation.”

The events in Georgetown were not overlooked by civil rights supporters on Capitol Hill. Sen. Kenneth Keating of New York asked that the prayer and comments of O’Boyle be entered into the Senate Congressional Record, to which there was no objection. How much of an impact the convocation actually had on Congress is not known, but the bill would finally be passed and signed by Johnson in July 1964. The Civil Rights Act of 1964, which ended discrimination based on race, color, religion, sex, or national origin, became one of the most influential pieces of legislation in U.S. history.

1. In his prayer, what does O’Boyle say about God’s creation of man?

2. How does O’Boyle compare Congress’ debate on the civil rights bill with how the religious leaders at the Interreligious Committee on Race Relation?

← "Religion and Race"
Next Page: