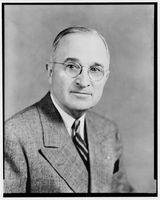 Due to the Social Action Department’s (SAD) involvement in issues of racial injustice, director Rev. Raymond A. McGowan was called upon to give statements or testimony on the Catholic stance on such issues to several organizations during his time as director between 1945 and 1954. The two documents presented here are two occasions in which McGowan had to address committees created by President Harry Truman.

In 1947, McGowan testified to the President’s Committee on Civil Rights about the work of Catholics in socio-economics for African Americans, spending much of the time espousing the accomplishments of several Catholic organizations in assisting African Americans, beginning with his own Social Action Department. SAD was at the forefront of social justice through various educational programs and the publishing of accomplishments in the field of interracial relations through Social Action Notes for Priests (excerpts from the March, May, and October 1946 notes can be found by clicking the links). In addition to listing these groups, McGowan also puts forth a “Declaration of Human Rights” that was drafted by SAD to be submitted to the United Nations. The declaration lists the rights of human beings according to Catholic social teaching. As a side note, McGowan already had a friendly face to speak to on the committee, as Bishop Francis Haas of Grand Rapids, Michigan, a fellow crusader for social justice in the Church and former dean at Catholic University, was appointed by Truman to serve on the committee.

McGowan would address Truman’s Committee on Government Contract Compliance in 1952, a committee specifically created to prevent discrimination by government contractors (Click here to read Truman’s comments on the committee). McGowan optimistically commented that it was hoped the committee would “not only eliminate discrimination in industries which have contracts with the Government …. but also by the exemplary action of these industries, have an effect also on other groups not now covered.” He also encouraged the committee to not simply conduct studies about the existence of discrimination, but to take action by holding hearings on alleged discriminatory practices, in addition to producing material for industries that informs workers and job seekers about their rights. These statements, following up on the Seminar on Social Action Problems of Negroes, put SAD in the forefront of civil rights among U.S. Catholics.

1. What did McGowan list as the steps that were being taken by the Social Action Department to rectify socio-economic problems for African Americans?

2. In praising the formation of the Committee on Government Contract Compliance, what did McGowan would be the outcome of the committee’s efforts?

← "Seminar on Negro Problems in the Field of Social Action"
Next Page: