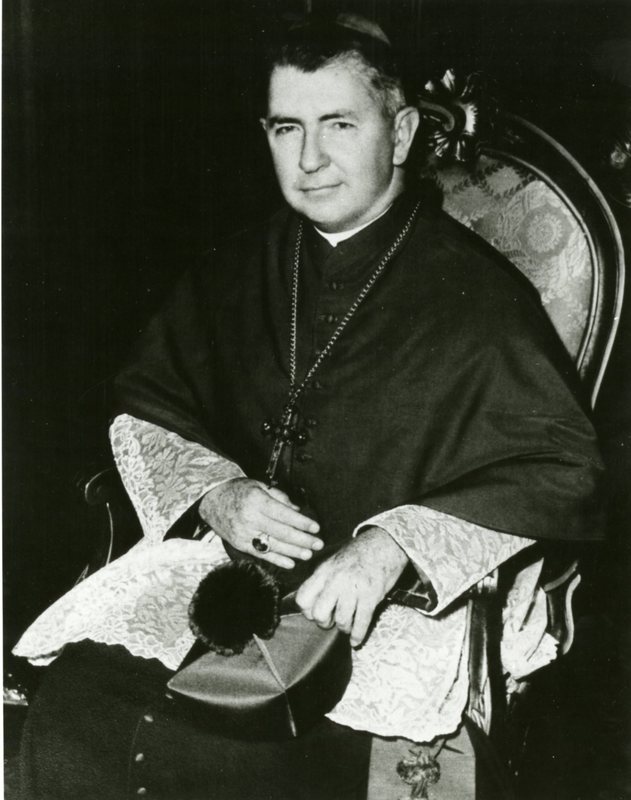 The integration of schools in the South was, to put it mildly, a difficult transition. Though the decision in Brown v. Board had been handed down by the Supreme Court in 1954, numerous school districts in the southern United States either integrated by piecemeal or patently ignored the ruling. While the majority of Church leaders throughout the country would agree with the Vatican’s stance that segregation and racism were moral evils, bishops in Southern states often had to balance this with the prevailing social mores of the day in their regions.

However, not all bishops were inclined to bend to the social will. Like his peers in Arkansas and Louisiana, Bishop Paul J. Hallinan of the Diocese of Charleston, S.C., not only held to the Church’s teaching on race, but was also determined to end and hint of segregation within his diocese. In this letter written during Lent in 1961, Hallinan (along with Bishops Thomas McDonough of Savannah, Ga., and  Francis E. Hyland of Atlanta, who each issued the same letter) addressed the issue of segregation with the membership of his diocese. Proclaiming that “hatred is neither Christian nor American,” the three leaders ordered the integration of parochial schools "as soon as this can be done with safety to the children and the schools." The bishops went on to remind their membership of the 1958 statement of the National Catholic Welfare Conference that excoriated the use of race as a determining factor of a person’s worth and that segregation “imposes a stigma of inferiority upon the segregated people” (Hallinan quoting the 1958 statement). 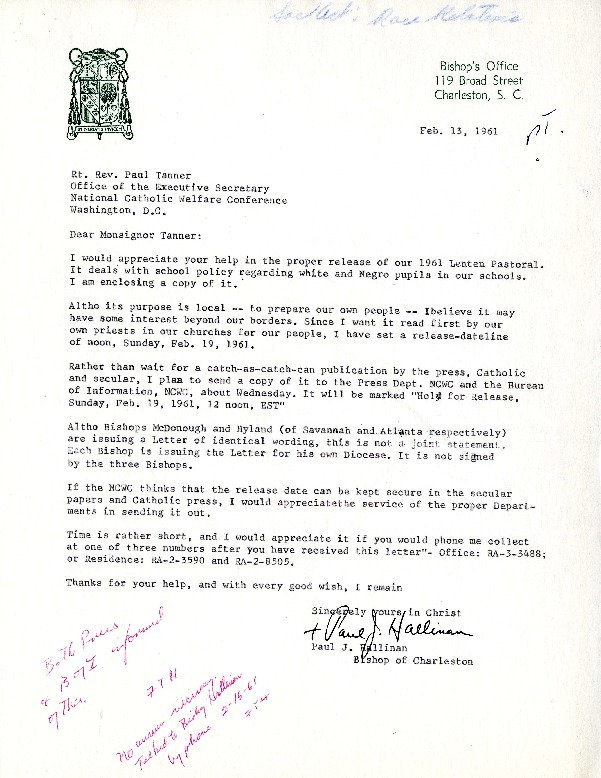 It is interesting to note that none of the three bishops who issued this letter was from their respective states, or even from the South: Hallinan was from Ohio, while both Hyland and McDonough were from Pennsylvania. This stand made in the Deep South was a courageous step for these bishops to make, but they made it clear, using the words of Jesus from John 13:34-35, “A new commandment I give you, that you love one another; that as I have loved you, you also love one another. By this will all men know that you are my disciples, if you have love for one another.”

1. What are the three parts of the policy that Hallinan sought to implement in regards to segregation in Catholic schools in South Carolina?

2. What is significant about the geographical area and time period of the letter?

← "The Catholic Church and the Negro in the Archdiocese of Chicago"
Next Page: