While many Church leaders would champion the ideals of civil rights, some found championing a worthy cause to be more challenging than for others. Southern parishes were especially difficult to change, as the effects of Jim Crow seemed to infiltrate every level of society and every part of life. There were successes, however. Archbishop Joseph Cardinal Ritter of St. Louis was one of those who succeeded, though not without difficulty. Ritter had previously served as the Bishop (later Archbishop) of Indianapolis, where in 1938 he had ordered the integration of parochial schools. He was named Archbishop of St. Louis in 1946, and soon after taking office in 1947 ordered the same measures for his new diocese.

His decision was not popular in Indianapolis, and it was just as unpopular in St. Louis, as seen in the letter presented here written by an unknown "self thinking Catholic."The opposition to Ritter’s directive was so bitter that a large group of white Catholics threatened to sue him to prevent integration. However, the archbishop would not back down, and issued a letter to parishes which said that any members who attempted to bring a court action could find themselves excommunicated. This dire warning had the desired effect, as the opposition dropped any threat of legal action. In his letter, Ritter also writes to “remind them (the opposition) of their filial obligation as Catholics to cooperate with their Bishop and Clergy and their Faith, namely, not only the equality of every soul before Almighty God, but also obedience to ecclesiastical authority.” 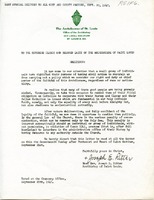 Ritter’s bold moves in Indianapolis and St. Louis more than seven years prior to the landmark Supreme Court case Brown v. Board of Education is an example of how at least some clergy in the Church were willing to challenge the societal mores in their diocese in order to engender true equality as taught by the Catholic faith.

1. What unusual argument for segregation did the writer of the dissent letter make?

2. Why did Ritter deem it necessary to issue this pastoral letter of warning?

← Statement by Archbishop Patrick A. Cardinal O'Boyle
Next Page:

"Catholics and the NAACP" →