American Catholic History Classroom > Exhibits > The Catholic Church, Bishops, and Race in the Mid-20th Century > Documents > "The Place of the Negro in American Society"; "Colored Girls May Not Live in Catholic University Dorms"

"The Place of the Negro in American Society"; "Colored Girls May Not Live in Catholic University Dorms" 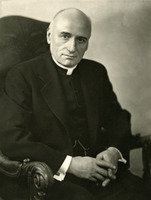 *NOTE: The American Catholic History Research Center understands that the documents presented here contain language and ideas that could be construed as having racist overtones. They are made available here, however, so as to provide a broad perspective of the struggle within the Catholic Church in the mid-20th century over issues of race.

The first leader of the National Catholic Welfare Conference (NCWC) Social Action Department and the foremost Catholic social justice advocate and theologian of the early 20th century, Msgr. John A. Ryan was noted for his stand on just wages for American workers as well as for establishing social ideas from a Catholic perspective that would later find fruit in President Franklin D. Roosevelt’s New Deal.

"The Place of the Negro in American Society"
Courtesy of ACUA

As part of his views on social justice, Ryan also had a belief in the moral equality of all races. In an address to Howard University in 1943, Ryan delivered the speech “The Place of the Negro in American Society.” Arguing that “every human being …. has intrinsic worth,” Ryan asserted that humans have natural rights , including life, personal integrity, income, property, education, self-expression, religion, and membership in associations. Ryan is critical of the exclusion of African Americans from the workforce, the lack of adequate education for them, their segregation from white personnel in the military, segregation in social situations and in public transportation, and their exclusion from colleges and universities.

However, Ryan’s address is also notable for the things he did not advocate. In discussing how equality could be achieved, Ryan discounted the need for universal suffrage, stated that segregation may have its place in elementary and high schools, and said interracial marriage was “irrelevant, unrealistic, and outside the realm of matters that anyone should bother his head about.”

It is the interracial marriage issue that became a target for criticism by the Baltimore Afro-American newspaper. In an article from March 1943, less than a month after the Howard address, the writer took issue with Ryan’s stance on inter-marriage by pointing out that no African American female students at Catholic University were allowed to live in dormitories on campus. The paper quotes Ryan as saying that there is “no discrimination against the colored girls. Of course, they cannot reside in the dormitories. No one has proposed that they live there …. I don’t think that the students would accept the idea of common lodging for colored girls as a whole.” These statements are indicative of the Church’s struggle, particular among its leaders, with the issue of race in the mid-20th century and how to address it properly.

1. Is there a contradiction between Ryan’s support for equality and his downplaying of the issues of desegregation, interracial marriage, and voting rights?

2. What seems to be the tone of Ryan’s address?

← "Can Prejudice Be Cured?"; "The Theology of Racism"
Next Page:

"Seminar on Negro Problems in the Field of Social Action" →