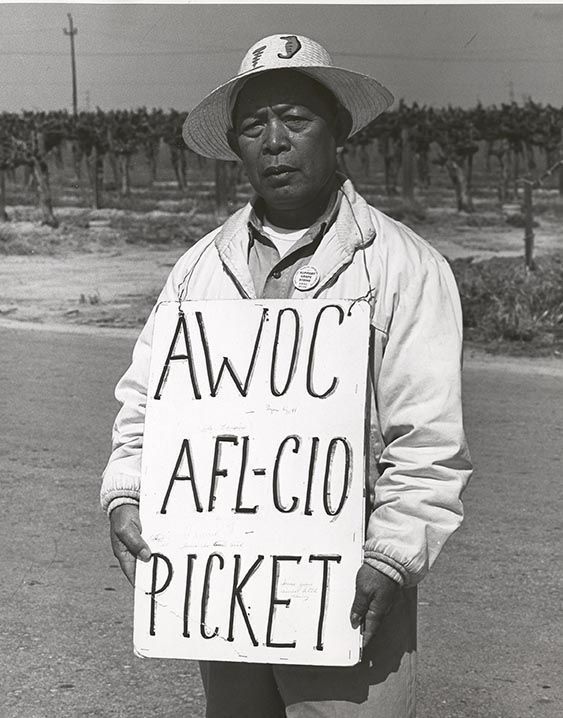 A Filipino picketer holds a sign showing the support of the AFL-CIO and AWOC (Agricultural Workers Organizing Committee) for the Grape Strike, Delano, California, in 1966.

The Delano Grape Strike had begun in 1965 with workers represented by the Agricultural Workers Organizing Committee, and later joined by the Cesar Chavez-led National Farm Workers Association (the two would form the United Farm Workers Organizing Committee in 1966). The unions were able to score a minor victory in 1966 when the U.S. Senate Subcommittee on Migratory Labor held a series of hearings in California, including Delano, where the UFOC headquarters was located. The subcommittee, which included Sens. Robert and Edward Kennedy, listened to testimony from growers and unionists, including Chavez, as well as Bishop Hugh Donohoe of the Diocese of Stockton (Click here to read the subcommittee’s report).

Speaking on behalf of the other bishops in California, Donohoe gave his support to the farm workers by acknowledging their right to unionize, and called for federal legislation to protect the right of collective bargaining and a mninmum wage for the workers.

This stand by the bishops was not received well by all Catholics in the state, particularly from growers. As seen in the documents presented here, a letter sent apparently to Monsignor George Higgins at the Social Action Department of the National Catholic Welfare Conference from Georgann Perelli-Minetti questions the involvement of the bishops in the union struggle. "It is apparent to me that the need for churches to administer to the spiritual need of man has taken a back seat to the need to fight causes of various types," she wrote. The letter included several news articles on the issue, with her comments throughout holding basically to the tenet that the clergy should remain neutral in the debate.

Perelli-Minetti's wishes would not only fail to come true, but she and other growers would see the Church become even more involved in the next four years. 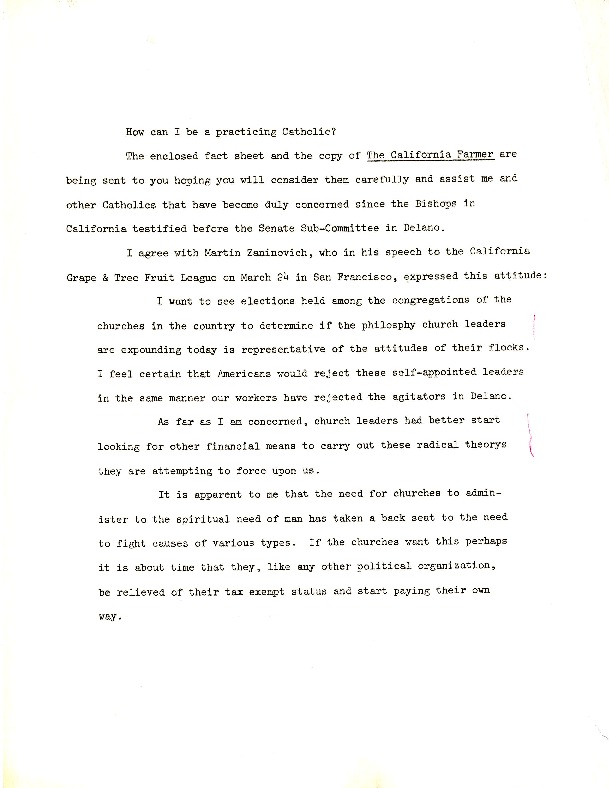 Letter from Perelli-Minetti to Higgins
Courtesy of ACUA

1. Why does the writer want the Church to remain neutral in terms of politics and labor?

2. Why does she consider the mass and a march a mockery of religion?

3. What reason might Perelli-Minetti have had to send the articles to Higgins?