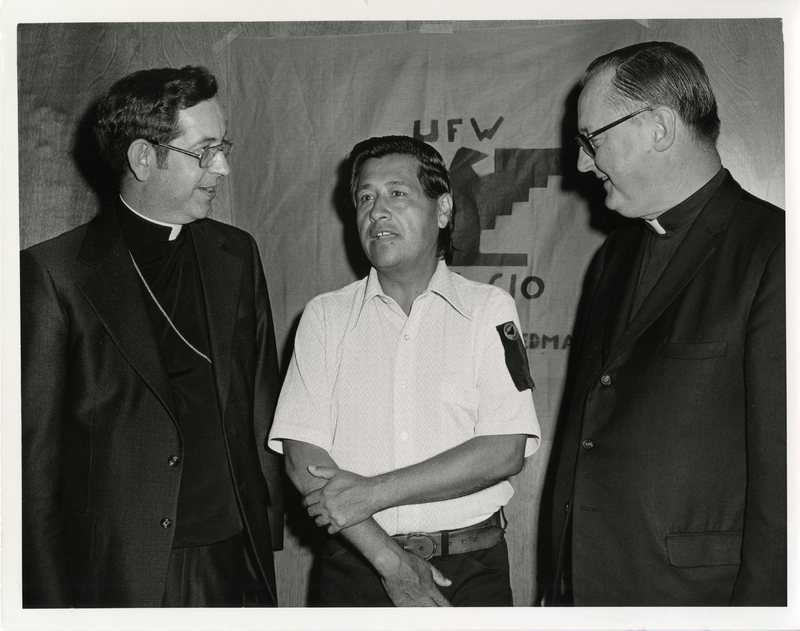 The Catholic Church in general, and the U.S. Church in particular, has had a strong connection with organized labor since the late 19th century. While there had been a general sense of social justice for all people in the years prior to 1891, it was the encyclical published that year by Pope Leo XIII, Rerum Novarum, which solidified the Church’s support of the working class. This connection would be strong throughout the 20th and into the 21st century, manifesting itself in the U.S. Church’s support of the right to organize, i.e. labor unions. More often than not, unions received the blessing and, many times, physical support of clergy around the nation. This support was evident in the battles to unionize agricultural workers in California from the 1950s through the 1970s, and the bond between the religious and the secular was most evident in the relationship between a “labor priest” and a Mexican-American labor activist.

Born in Chicago in 1916, Monsignor George G. Higgins developed an interest in labor from an early age, carrying with him into seminary in Illinois and graduate work at the Catholic University of America in Washington, D.C. Upon finishing his four years of study at CUA in 1944, Higgins immediately went to work for the National Catholic Welfare Conference’s Social Action Department, where he would remain for the next 36 years, serving as the department’s director from 1954 to 1967. He also took over the authorship of the syndicated column “The Yardstick” from legendary SAD director Father Raymond McGowan, which afforded Higgins the opportunity to speak on labor and social problems. While Higgins would become involved in numerous social causes during his tenure, he gained his nickname of “The Labor Priest” for one reason: his lifetime support for workers and labor unions. It was this support that would lead Higgins and other clergy to the farm workers of California and a charismatic labor leader. 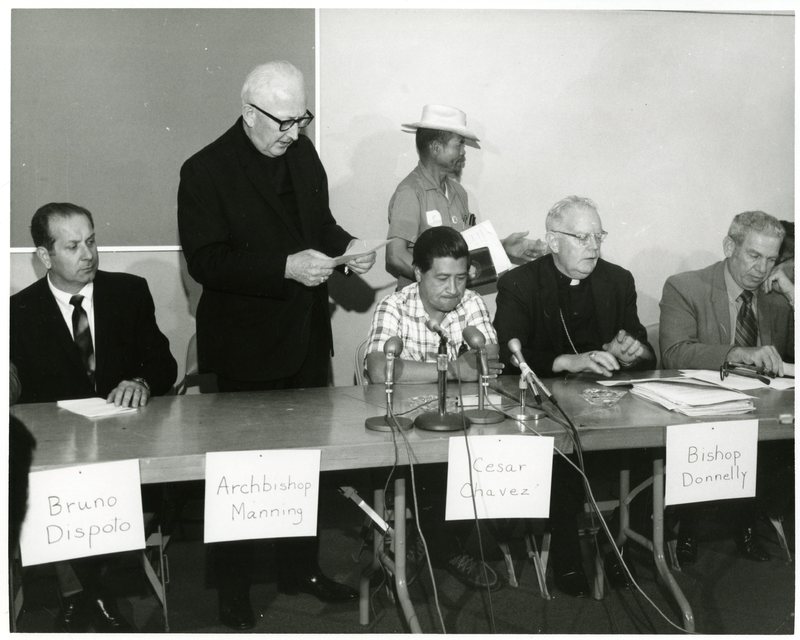 Archbishop Timothy Manning of Los Angeles speaks at a press conference announcing agreement between UFWOC and Dispoto and Bianco companies. Cesar Chavez and Bishop Donnelly are at right; Bruno Dispoto at left.

Cesar Estrada Chavez was born in Yuma, Arizona, in 1927 to a Mexican-American family. Due to struggles during the Great Depression, the family moved to California to become migrant workers. With little formal education, Chavez worked in the fields exclusively by the time was a teenager before joining the U.S. navy in 1944. After returning from World War II, Chavez married Helen Fabela and they moved to San Jose. Until the mid-1950s, Chavez would continue to work as a farm laborer until he became interested in unionization. Many agricultural businesses relied on migrant workers, mainly Mexican-Americans or Mexican immigrants, to work their fields, and the growers rarely showed any interest in the well-being of their laborers. Chavez became an organizer first for the Community Service Organization, then co-founded the National Farm Workers Association with Dolores Huerta in 1962 to improve conditions for laborers. Later called the United Farm Workers, the union led strikes against numerous vegetable and fruit growers and worked to draw farm laborers into the union. The work of Chavez caught the attention of many nationally, including Church clergy, due also to Chavez’s strong Catholic faith. This attention led to his meeting with Higgins and other clergy.

At the time that the Church became involved with unionization efforts in California, UFW had already called for a strike and boycott of grapes from California growers, known as the Delano Grape Strike. While the National Conference of Catholic Bishops (the successor to the NCWC) never officially supported the boycott due to fears of alienating growers who were Catholic, Higgins was not shy of voicing his support for the UFW. In 1969, the NCCB did establish the Bishop’s Ad Hoc Committee on Farm Labor (of which Higgins was a member) to support the rights of workers in the agricultural industry. Through this work, Higgins met and became a close confidant of Chavez, with the two working together over a period of approximately six years to win the right for farm laborers to vote for unionization (obviously with the UFW). 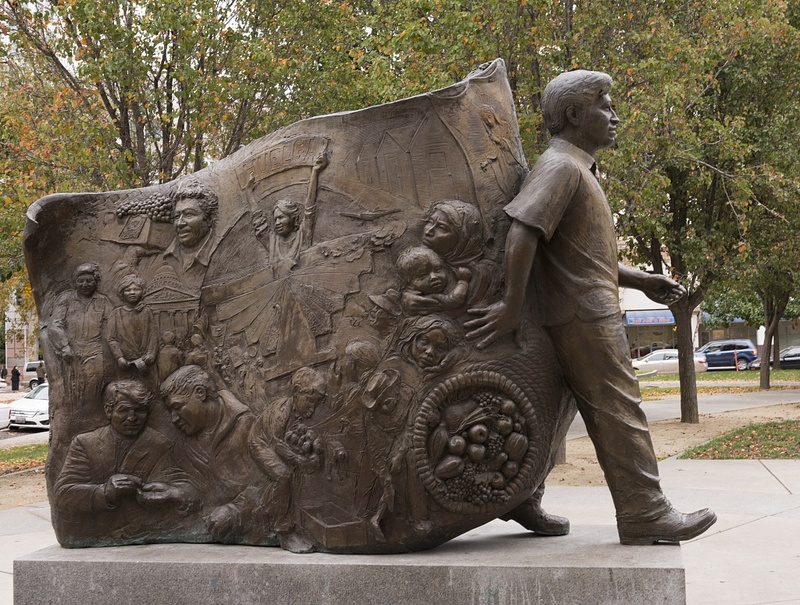 Photo by Carol M. Highsmith
Courtesy of Library of Congress

The Ad Hoc Committee assisted in the ending of the grape boycott by helping the UFW to negotiate union contracts with growers, and supported Chavez and his organization through another strike and boycott of lettuce during what has been termed “The Battle of the Salad Bowl.” The latter confrontation, which essentially began as soon as the grape boycott ended in 1970, would last longer and be harder to overcome due to the battle between the UFW and the Teamsters for union members, as well as the intransigency of growers. The long fight eventually ended in the passage of  the California Agricultural Labor Relations Act in 1975, which guaranteed the right of unionization and collective bargaining. It was a great victory for the UFW and its supporters.

Following the passage of CALRA, the Ad Hoc Committee became less involved in the work of the UFW, as it began to focus on other needs. Higgins and Chavez began to hear from each other less due to different foci, with Higgins retiring from full-time work in 1980. The relationship, according to author Marco Prouty, seemed to be irreparably harmed in 1981 after a series of letters between the two disputing what Higgins believed were troubling signs of the decline of the UFW, something which Chavez vociferously denied. Though some correspondence would continue between the two following this, the close relationship was over.[1] Chavez would die in 1993, and Higgins would follow in 2002. Despite the sad end to their relationship, the two men managed to forge a strong bond for several years in the late 1960s-early 1970s that helped to bring monumental change to thousands of laborers seeking a better life.

This exhibit presents articles and letters written by Higgins, Chavez, and others that details the story of the Catholic Church and the UFW from the late 1950s up through the mid 1970s. Through these documents, it is hoped that a picture of cooperation between organizations seeking to better the lives of thousands will appear, that social change is possible or, in the words of Chavez “Si se puede” (“It can be done).