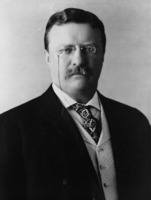 In June 1903, Mother Mary Harris Jones traveled to Philadelphia to support the textile workers' strike. Of the 100,000 workers on strike, 16,000 were children under the age of 16. Among the union's demands were the shortening of the workweek from sixty to fifty- five hours a week and the banning of night shifts for women and children. Supportive of the strikers' demands, Mother Jones began looking for alternative ways to garner publicity for the strikers, when the newspapers refused to cover the strike. The newspapers' decision stemmed from the fact that mill owners held stock in the newspapers.

On July 7, 1903, she announced her plan for 100 children textile workers, with adults and labor leaders, to march from Philadelphia to New York City. A week into the march, she wrote a letter to President Theodore Roosevelt, asking for his support. Receiving no response, on July 28, 1903, Mother Jones with three children and two march organizers quietly attempted to meet with President Roosevelt at his home outside New York city. His secretary met them at the gate to inform her that the President was not in and to instruct her to write a second letter. This letter was published in Philadelphia's North American. Shortly after, she received a reply from the president's secretary, informing her that the issue of child labor fell under state jurisdiction and not federal. This assertion contradicted the fact that state child labor laws had been repeatedly struck down as unconstitutional. 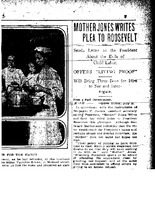 ← The Autobiography of Mother Jones, 1925
Next Page:

Back to the future.