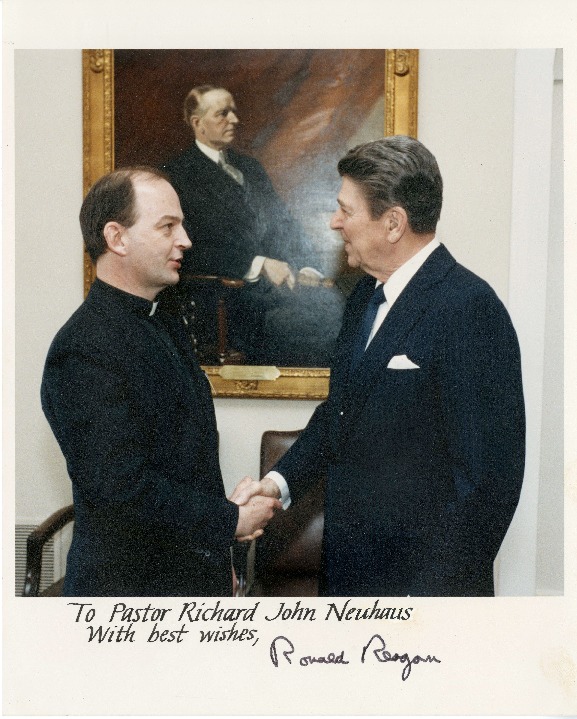 Richard Neuhaus meets President Ronald Reagan. Neuhaus came to prominence in Republican circles with the publication of his book, The Naked Public Square in 1984, the year of Reagan's reelection as President of the United States.

The Hartford Appeal for Theological Affirmation publicly marked Neuhaus’ theological and political break with left politics and liberal Christianity.  The appeal was written by Neuhaus and his friend Peter Berger in 1974 as a critique of mainline Protestantism.  A group of theologians of Christian background were then convened at Hartford Seminary in Connecticut to debate the list of criticisms.  The Appeal asserted that there was “an apparent loss of a sense of the transcendent” among the contemporary Church’s leaders and members, and that this was “undermining the Church’s ability to address with clarity and courage the urgent tasks to which God calls it in the world.”[1]

Berger and Neuhaus’s 13 themes comprising the Appeal amounted to a series of statements about modern Christianity that they rejected.  The list included the following:

* That all religions were equally valid

* That human institutions and historical traditions repressed true humanness, and liberation from them was required for an authentic existence and authentic religion

* That the world should set the agenda for the church

* Social, political and economic programs to improve the quality of life are normative for the Church’s mission in the world.

* The struggle for a better humanity will bring about the kingdom of God.

In fact, the themes outlined above, among others, would be those he would work to oppose in the decades after the Appeal was written.

Neuhaus was already a national public figure at this time.  But the Appeal immediately generated publicity and controversy because it suggested a rift inside of American Christianity.  Neuhaus looked to “the Roman Catholics, the evangelicals, and the Lutherans” to help revitalize Christianity at the time, viewing other mainline Protestant denominations as incapable of such.[2]   He increasingly saw mainline Protestant churches as capitulating to conformist mainstream culture.  His writings over the next decade, in Worldview and in his books, further honed his positions on modern politics and religion.  But it was the publication of The Naked Public Square, Religion and Democracy in America in 1984 that catapulted him to lasting fame and influence in national politics.

The book’s premise was that modern political doctrine and practice sought to exclude religion and religiously grounded values from the conduct of public business, leaving a “naked public square,” or one devoid of religiously-based values that would morally guide it.[3]   Neuhaus argued that a “moral majoritarian” movement in opposition to the doctrine of secularism that informed the current state of affairs had been building for decades.  Though many of the ideas in the book had been articulated by Neuhaus previously, this book’s timing was impeccable.  Ronald Reagan was reelected that month in a landslide victory wherein he appealed to Christian voters who felt that their values were being marginalized in public life.  Indeed, as a television interviewer joked to Neuhaus in reference to the book in the run up to the 1984 presidential election, “I’ve known authors to go to great lengths to promote their books.  But arranging a presidential campaign, isn’t that a bit much?”[4]  With the book’s publication, Neuhaus became an influential spokesperson and advisor on the role of religion in political life, particularly within Republican circles.   As Neuhaus biographer Randy Boyagoda notes, where Neuhaus had prior to 1984 sought to influence public life through Democratic Party politics, after that, he “consciously and actively aligned his plans for the very same with the Reagan administration and the Republican Party, and alignment that would continue for the rest of his career.”[5]   Indeed, Neuhaus believed that the support given Reagan by Christians amounted to a significant challenge to the naked public square and he would continue to focus on encouraging it through his writings and media appearances.

Around the time of the publication of The Naked Public Square and Neuhaus’s political realignment, the pastor formed a relationship with Archbishop John O’Connor, appointed episcopal leader of the archdiocese of New York in 1984 by John Paul II.  The two men would admire each other until O’Connor’s death in 2000, bonding especially over their public opposition to abortion.  When Neuhaus decided to convert from Lutheranism to Roman Catholicism in 1990, then to become a Catholic priest in 1991, it was O’Connor who directed him, though Avery Dulles, another convert to Catholicism, who oversaw his instruction and preparation.  He was received into the church in 1990, then ordained as a priest a year later, in 1991.[6]

By 1992, Neuhaus, along with Robert Novak and George Weigel, were part of an influential group of Catholic conservatives one commentator in Europe, Lucio Brunelli referred to as a "Star Spangled Trinity."  As Brunelli saw it, “they have no hesitation in describing democratic capitalism in its moralizing American version” as “the social system ‘nearest perhaps to the gospels that has ever been developed by the human race.”[7]  By 1998 and 2004, in American political circles, Neuhaus’ ideas were gaining more attention from political leaders such as George W. Bush and his advisor Karl Rove. Neuhaus specifically advised Bush on his abortion stance, and offering him suggestions on historical figures to quote in support of his military positions.[8]

From these years, until his death in 2009, Neuhaus reached the height of his influence, offering advisement to conservative leaders in American politics.