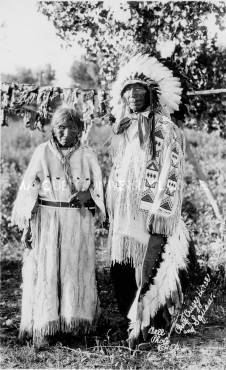 The Indian Sentinel, 1902-1962, publication of the Bureau of Catholic Indian Missions for a predominantly non-Native American audience, apparently designed to educate U.S. Catholic faithful about Indian missions. Note the changes in style and approach from the beginning to the end of the publication.

-1902-3 issue. The first issue of The Indian Sentinel is very Victorian in style and is notable for a rather condescending, almost paternalistic tone towards the Native Americans who are the subject of the missions.

-1910 issue, in which it is excitedly noted that the Holy Father, Pope Pius X has commended the work of the Preservation Society.

-1922 issue, “Jogues Number”- the magazine has a device of naming each issue after a different Catholic missionary to Native Americans. This issue is interesting because we see how Catholics conceptualized early Jesuit martyr Fr. Isaac Jogues at the time.

-1933 issue, includes articles on Catholic Sioux and missions in Alaska.

-1942 issue, includes articles “Grandfathers’ Stories” and “Mushing to Scammon Bay”, also in 1940s the magazines start using photos rather than illustrations on the covers.

-1950 issue. Even though this issue shows more instances of Native American participation and agency, it still refers to them in somewhat passive terms, as being “shepherded”, or being “cooperative."

-1960 issue (the sole issue for that year); the cover is of a Native American traditional basket weaver, rather than of any particularly Catholic subject matter.

-1962 issue, the last issue. Not only does the cover, once again, feature the non-religious theme of older Native American men at work building a fence, but the issue contains an article titled, “Christ to Eskimos, by Eskimos” suggesting the importance of missionary work by religious who share their congregants’ ethnicity.

← Catholic Missionaries in the New World
Next Page: