Inter-Office Communication of the NCWC from Bruce Mohler to Msgr. Carroll, November 28, 1949, with enclosure, letter from Father Killion to Bruce Mohler, November 21, 1949 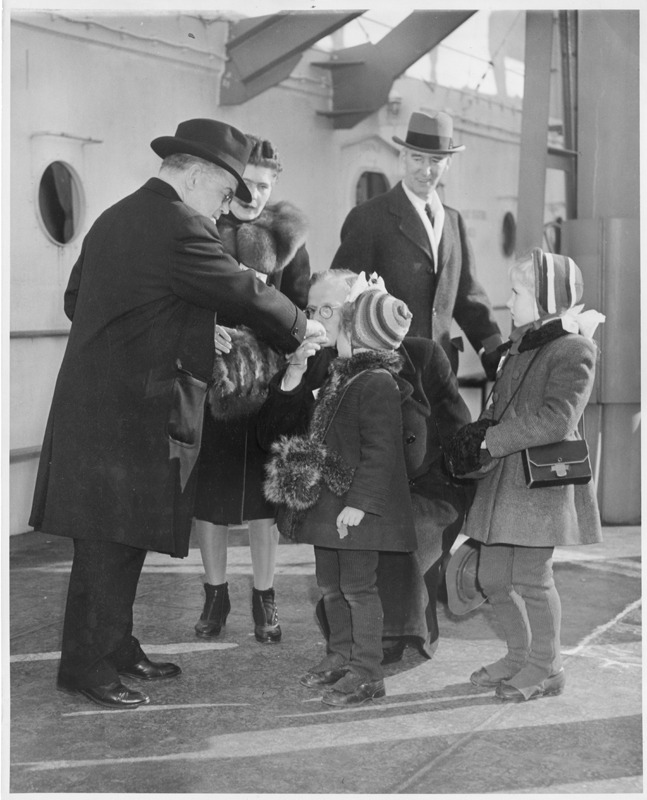 Notice that because this document is an inter-office communication and not intended for viewing by the Catholic laity, in contains a sharp difference in tone from some of the NCWC’s other publications, and is much more conspiratorial and less evangelistic and optimistic. Rather than talking about the Church’s mission of hope in the world, Father Killion gloomily notes the Catholic Church’s lack of influence and sway in international circles. Bruce Mohler echoes Father Killion’s tone of vigilance. Father Killion, the Vatican’s observer at meetings of the International Refugee Organization, worries that the IRO has been expending almost no effort to help Catholics, and furthermore that the organization is heavily influenced by Communists and Jews. Catholics have been assigned to almost no positions of leadership in the IRO while, according to Father Killion, Communists and Jews are well-represented in the membership. The Communist influence is spoken of only in general terms, though it is alleged that if the US State Department knew the extent of the influence, they might reconsider the generous funding they extended to the IRO. 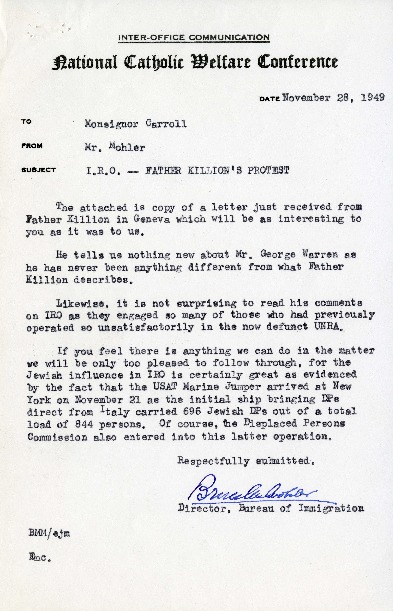 Mohler to Carroll with letter from Killion

Father Killion’s allegations of Jewish influence are an example of the anti-Semitic conspiracy theories we sometimes observe among both Catholics and the general public during this era. Anti-Semitism in the United States reached a peak during the 1930s and at the beginning of World War II, before receding during the course of the war and its aftermath. During the Nazis’ rise to power, some observers in the United States asserted that Hitler was right to be suspicious of the Jews, but the atrocities of World War II went a long way towards discrediting anti-Semitism in the popular mind. Nonetheless, many remnants lingered, like the attitudes we see in this letter. Jewish people had historically been involved in financial trades, because of prohibitions, in many European countries, on Jews owning land. These laws were lifted during the Enlightenment, but Jews remained associated with banking and lending in the popular imagination, leading to many paranoid conjectures that Jews somehow controlled the world’s finances. Although Jewish people have always been only a small fraction of the population in Europe and America, they have been the subject of a disproportionate amount of controversy and hatred. Catholics, in particular, had a long history of seeing Jews as part of a vaguely-defined but sinister world conspiracy, along with Freemasons. This document makes much of the fact that a representative of the new state of Israel had recently obtained a grant of two and a half million dollars from the IRO (Israel was, of course, one of the main destinations for Jewish refugees and Holocaust survivors who had no desire to remain in Germany). Whatever Father Killion’s motivations may have been for believing and writing such things, from the perspective of the present day it seems an almost unbelievable stretch of the imagination to seriously hold theories of worldwide Jewish conspiracy so soon after the Nazis’ attempted genocide. Particularly insensitive is Father Killion’s unfortunate choice of phrase that “the Jewish problem in the IRO is practically liquidated”! It seems that postwar efforts at refugee aid were, in general, a missed opportunity for Catholic and Jewish organizations to work with each other.