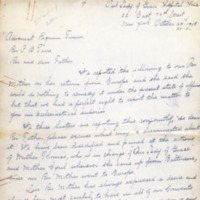 The three young nuns, Sr. Mary Catherine, Sr. Mary Nepomucene, and Sr. Mary Aloysius wrote this letter in support of Mother Joseph and in opposition of Mother Demetrias and her supporters to the Mission Helpers' Spiritual Director Fr. Tarro on October 30, 1906. Fr. Tarro, however, had sided with Demetrias and the older nuns at this time. On November 5, an election was held in Baltimore at which Fr. Tarro presided and Demetrias was elected Mother Superior. The next day, the three nuns who authored this letter with Mother Joseph herself, all still at the convent in New York, left the order and rejoined secular life. While you can read the entire document in the attached PDF, some of the letter is transcribed here:

"Rev and dear Father,
We reported the following to our Rev Mother on her return from Europe and she said she could do nothing to remedy it under the present state of affairs but that we had a perfect right to report the matter to you our ecclesiastical superior.

We three Sisters are reporting this conjointly, so dear Rev Father, please excuse what may be disconnected about it. We have been disedified and pained at the actions of Mother Thomas, who is in charge of 'Our Lady of Grace' and Mother Cyril, whenever she came up from Baltimore, since our Rev Mother went to Europe.

Our Rev Mother has always expressed a desire and always been most careful, to have in all of our Convents a Sister to look after our little children, or women, or any one under our care in other words, of never leaving them alone; here since our Rev Mother went away, our children, deaf mutes and Porto Ricans and the women inmates, have been left almost entirely to themselves.

The children have been alone for rising, retiring at their meals and at all times, without surveillance of any kind.

Their neglected condition, careless washing, dressing etc has been reported to Mother Thomas several times and nothing was done about it.

Besides being neglected they have been ill treated and abused. One of our little Porto Rican children was suspected of getting a letter out to her Aunt; without Mother Thomas or the Sisters knowing it, and when mother Thomas found it out she got into an awful passion, beat the child in the face with clenched hands, stamped her foot and said 'if you get any more letters out without my knowing it I'll kill you.'

The beating of another child mother Thomas tells of in this way; 'she was out in the hall screaming like an animal and I went out and gave that animal some thing.' The child was beaten about the face till she was almost senseless, for a little while she could not move.

The women also have been left without surveillance, except for that of the nurse who is a Protestant, and while a respectable woman is barely a shade above themselves.

Mother Thomas also has taken no interest in the house, she has not gone through to see how matters were going along. She went through occasionally with visitors, once while the plumbers were here and perhaps a few other times. Neither did she give any sister charge of going through and when sisters of their own accord went around and saw things that were neglected and reported the matter to her nothing was done.

Rev dear Father we have felt in the convent a peculiar change an inexpressible something which has grieved us beyond expression, the mysterious conversations of Mother Thomas and Cyril, the frequent conversations of Mother Cyril and Miss Cunningham, the numerous telegrams and special delivery letters going back and forth and through it all such an air of mystery. The thing that impresses us most is the strange and changeable attitude of both above named mothers towards the sisters since Rev Mother's departure for Europe. In the beginning both mothers were very nice to sister Aloysius until Mother Demetrias came. Mother Demetrias immediately wanted to make changes in things that Rev Mother had most carefully and kindly settled for the Sisters, made unpleasant critical remarks about the work of the Community and spent a great deal of time talking to Miss Cunningham. Immediately after that, Mother Cyril's attitude towards Sister Aloysius changed. Sister could not say a word without it being contested by Mother Cyril, who made it very unpleasant for her. ......

...We are extremely disedified at the disrespect with which Rev Mother since her return has been treated by Mother Thomas also at the disrespectful criticism made of the work in New York by both Mother Demetrias and Thomas and the dislike manifested for it. ...