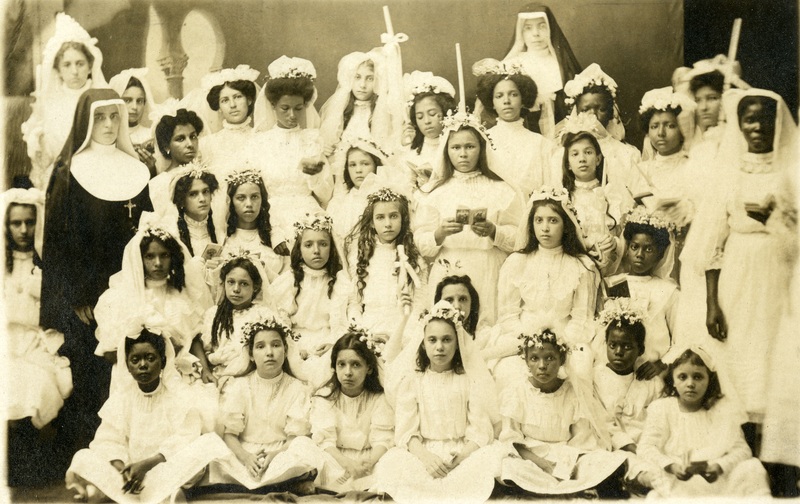 Girls on the day of their First Communion in San Juan, Puerto Rico in 1909.

The most significant outcome of the Spanish-American War in 1898 was Spain’s ceding the Caribbean islands of Cuba and Puerto Rico, and the Pacific islands of Guam and the Philippines to The United States. The United States’s acquisition of these islands as colonial possessions soon initiated a period of “Americanization” as it imposed American political and economic systems on the subjugated territories. Simultaneously, scores of American Protestant missionaries came to the islands seeking to advance further “Americanization” in the cultural and religious realms. Unlike most of the American political and corporate officials who came to the territories, many of these Protestant missionaries had learned to speak Spanish, moving to rural areas and ministering to the poor. The Foraker Act of 1900, meanwhile, revoked Catholicism’s status as state religion in the Caribbean.[1]

Already veterans of the Catholic Church’s struggle against Protestant “sectarians” for the souls of Italians and African Americans in the United States, the Mission Helpers now helped bring the battle to the traditional Catholic strongholds of these former Spanish territories. Alongside a few other groups, the Mission Helpers were among the first American Catholics who actively sought to obstruct Protestant efforts in the islands, founding houses in Puerto Rico in 1902, and in Guam in 1905. In doing so, the Mission Helpers established themselves as a Catholic alternative to the largely Protestant “Americanization” efforts already underway.[2]

The Mission Helpers first instituted houses in Puerto Rico’s capital city, San Juan, as well as in the smaller towns of Aquadilla and Ponce. They brought with them the skills and strategies they had already developed in the northeastern United States: they learned Spanish, established religion classes and a school for deaf Puerto Rican children, they visited families in their homes, often riding by horseback to reach more distant rural settlements, and visited inmates in some of the island’s prisons.

Yet the nuns found that they not only had to contend with Protestant missionaries in Puerto Rico’s more remote rural villages, but also the teachings of “Spiritualist” preachers who were quite popular in some parts. Spiritualism had developed in the Caribbean as a fusion of Catholic and African beliefs and practices which both Spanish and American colonial governments had restricted, fearing that their gatherings were centers of insurrectionist activity.[3] But in the rural regions of Puerto Rico, where the reach of colonial governments was limited, the Mission Helpers encountered many Spiritualist ministers as they travelled to parishes that had not seen a priest in ages despite the Catholic Church’s monopoly on official religion under Spanish rule.

Mother Joseph proved to be a zealous advocate for the Mission Helpers’ work in the new American territories. After establishing houses in Guam and Puerto Rico (where she herself stayed to do mission work from 1903 through 1904), in 1905 she began petitioning the Catholic hierarchy to expand the order into the Philippines. Cardinal Gibbons and other ecclesiastics granted her this permission in 1906; however, he revoked it only a few months later after learning the extent of the nuns’ financial problems, which was partly a product of their aggressive expansion. In the aftermath of the Cardinal’s discovery, Mother Joseph was replaced with Mother Demetrias as Mother Superior of the order (a drama more fully described on a later page). With the order facing bankruptcy, Mother Demetrias closed the Guam house in 1907; however, the Mission Helpers kept their houses in Puerto Rico open and still have a presence there today.

The following page links to letters and other documents that present this period in Puerto Rico’s and Guam’s histories from the perspective of the Mission Helpers who encountered the islands and their peoples as representatives of the old (Catholic) religion and the new (American) imperialists.

[2] See Mary Beth Fraser Connolly, “Sister Justina Segale and Americanization: The Making of Catholic Italian Americans,” Vincentian Heritage Journal 33 (2016): http://via.library.depaul.edu/cgi/viewcontent.cgi?article=1465&context=vhj for an example of this kind of effort among Italian immigrants in the Midwestern United States.

← Documents Regarding the Ministry to Italians
Next Page: