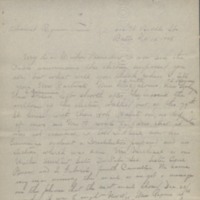 "My dear Mother Benedict,
I am sure the cable announcing the election surprised you all but what will you think when I tell you Mrs. Hartwell, Miss Maczalouis, Miss Geohegan, Miss Doulon, left shortly after they learned the outcome of the election, walked out of the 79th, St. house with their Holy Habits on, no dispensation of vows, and Mrs. H. wrote Fr. Tarro, that it was not essential. I told Sr. Paul how his Eminence ordered a Constitution prepared and an election, which was done, Mo. Michael is our Mother Assistant, Sister DeSales, sec., Sister Cyril Bursar and Sr. Gabriel, fourth Counseller. We came very near using the mail, as we got a message over the phone that the next mail closed Dec. 23/06 and here it was to night Nov 13/06. Miss Regina is sending some Candies which I hope will reach you safely and in good condition. My letter to Sister Paul I think was clear enough to let yourself and she see that our affairs had taken a most serious turn but we did not have as much trouble as we anticipated. His Eminence and Fr. Tarro were determined to see justice done and also to stop the waste of the funds of Community. The whole thing from beginning to end has been nothing short of miraculous, you know how in the past everything that Mrs Hartwell undertook seem to prosper, well this time, on the contrary, all she said and did turned against her, there was none of us there, that is our Community Sisters, had a word to say in her defense and as far as can be seen our good god has chopped her, it is pitiful to see how she has acted, not one virtuous act she has shown. Srs Cath, Aloysius, Nepemocene, were blinded by their human affection and ambition and have now the reward usually meted out to those who prefer self to God it is all so sad. Fr. Tarro says it has come none too soon, at the rate Mrs H has been going since her return from Puerto Rico we probably would have gone to pieces in another year. God's ways are marvelous, He gave her plenty of chances, but she refused the last one.

Fr. Tarro came in on the morning of Nov 5/06 the day was a beautiful one, he opened our first Chapter, twelve of us were present, all of the professed of five years were on roll and also eligible for office, if age and profession were not wanting, the Constitution was next voted on and accepted (Mother Joseph's name headed the list), then the election began it was held in Chapel and was most solemn, you know the result Now we must get into shape a little after our long years of constant change. We are not having Night Exposition the rising bell is rung at five oclock we say morning prayers 5:30 after this make 1/2 hr of meditation, then Holy Mass 6:30 breakfast 7 am Examen at noon and five petitions of Psalter of Jesus Angelus. Night prayer 8:30 Blessed Sacrament Reposed 9:00pm. We make examen and read points before So now all pray that the Holy Spirit in whose name we first came together may guide us aright in all things. We are all very happy and peaceful. Fr. Tarro does not wish us to keep the 79th St house in NY and on account of your poor health and also because of the Deaf Mute work here he as well as all of us want you home but it may be some time before we can get a sister off, Sr. Gabriel wants to go very much but because there is no one to take her place [...] she cannot leave just now. Try and spare yourself all you can and just as soon as the N.Y. house has been closed a sister broken in for Sr. G's work we will relieve you, do not send any money home except for supplies, but save for trip and you could begin now finding out the best and most comfortable means of conveyance. (My love to dear Sr. Paul, and would she were there, we need her badly to take care of Ironing room, I can see her laugh and hear her say, Deo Gratias, no more Ironing room.) Sr. Vincent's health is very poor ... I have not seen Mrs Hartwell since I bid her good bye for Atlantic City april 1905, the three who left with her I had a little conversation with each of them, Sr. Fidelis has gone, Srs ... so you see we have been depleted, and what would have happened had Manila been carved out Sister Josephine went home to Porto Rico, last Saturday. His Eminence when Mo. Michael and I went to see him after the election to get his blessing he gave us a nice instruction told us to be all united get our debts paid and keep in close touch with all the houses, so that the spirit of the Institute might not be lost. he was most kind and fatherly. Fr. Tarro comes in every week. Our little Community is surely the work of God, since no human power has been able to destroy it and since He has chosen us to do His bidding ...