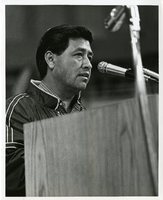 Cesar Chavez speaking at an event

Since the late 19th century, the U.S. Catholic Church has had a strong connection to labor. Clergy and laity have pled the cause of the working classes in metropolitan areas down to the smallest farms, standing on picket lines and encouraging legislation to support unions and laborers. The Church, particularly a committee of the National Conference of Catholic Bishops, would become involved in a high-profile labor dispute in 1970 by seeking to negotiate contracts between large agricultural farms and laborers in California. While the United Farm Workers Organizing Committee had been laboring for five years to conclude such contracts with growers with minor success, the work of the Ad Hoc Committee on Farm Labor from the NCCB in 1970 and after would help the union even more in the years to come. At the heart of this cooperation was Monsignor George Higgins of the Ad Hoc Committee and Cesar Chavez of the UFWOC. The two men would work tirelessly to achieve economic justice for the field laborers in need of representation. What follows is a set of six documents chosen from the collections of Higgins and the Ad Hoc Committee that represent important events and ideas in the farm labor struggle between 1965 and 1973.

For more on this topic, click here to see the exhibit "George Higgins, Cesar Chavez, and the Unionization of California Agriculture, 1955-1977."