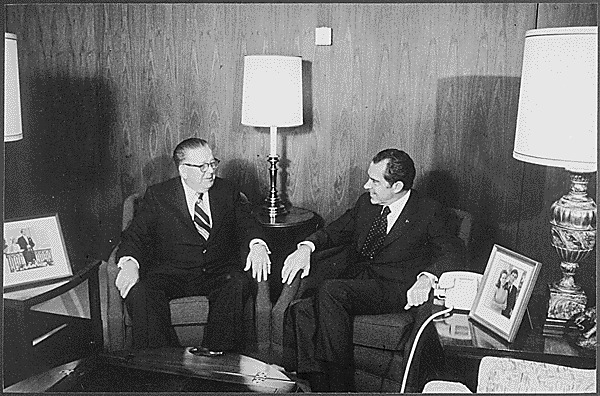 Courtesy of the National Archives

By 1973, things had begun to worsen for the UFW, particularly in its dealings with the Teamsters. The latter had already negotiated several deals with lettuce growers, thereby breaking an agreement with the UFW. They subsequently made another raid into UFW territory in 1973 by negotiating new contracts with grape growers. The contracts that the UFW had fought had to achieve in 1970 were expiring, and the Teamsters took full advantage. This left the severely underfunded UFW in a position to fight one of the most powerful unions in the world on different fronts, in addition to having to attempt negotiations with growers.

At this time, the National Conference of Catholic Bishops (NCCB) Ad Hoc Committee (and, in effect, the NCCB itself) finally dispensed with any veneer of impartiality in the dispute and solidly backed the UFW. Monsignor George Higgins strongly rebuked the Teamsters for their apparent support of a bill in Congress that would place the UFW under the National Labor Relations Act (NLRA), allying them with the National Farm Bureau Federation. This criticism led to a letter by Teamsters president Frank Fitzsimmons to Higgins in which he defended his organization and promoted the farmworkers coverage under NLRA. He also offered no apology for the newly negotiated grape contracts and that the Teamsters “are the only union with enough economic clout to negotiate with the growers successfully for the workers, within the law.” 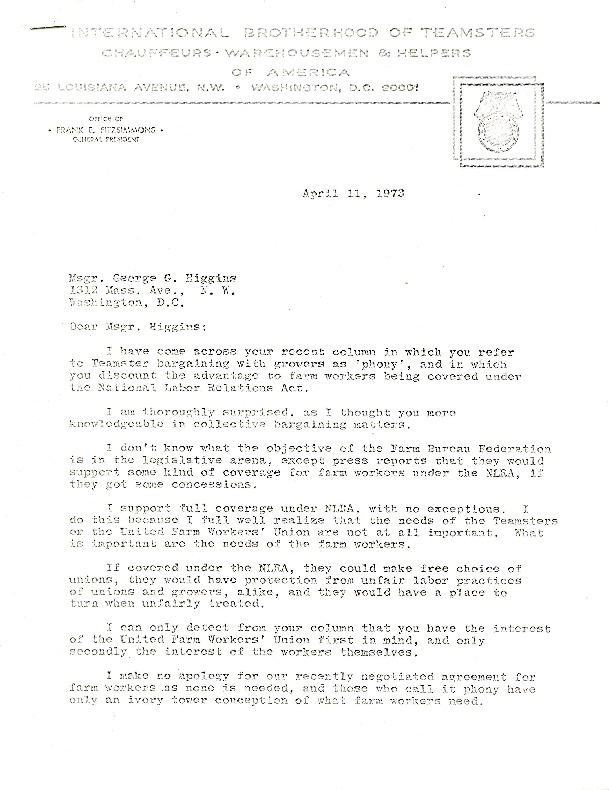 Fitzsimmons to Higgins
Courtesy of ACUA

In reply, Higgins wrote back that the focus on pros and cons of NLRA coverage was irrelevant, arguing instead that “the crucial point to bear in mind is that your overall position with regard to the farm labor controversy puts the Teamsters completely at odds with the overwhelming majority of those who can legitimately claim to have at least a modicum of competence in the field of collective bargaining.” Higgins also argued that in a recent trip to the Coachella Valley, the vast majority of field workers desired to be represented by the UFW, not the Teamsters.

The battle between the two unions would continue for four more years, when the two sides finally agreed in 1977 to respect jurisdictional boundaries with the UFW representing field workers and Teamsters would represent the machine and warehouse workers. Even before this, in 1975, UFW claimed a victory when the California State Legislature passed the California Agricultural Labor Relations Act, which gave workers a right to choose which, if any, union would represent them through secret ballot elections and established the labor relations board to supervise elections and resolve labor conflicts.

While the work of the UFW was not done and still continues to this day, this event marked the high water mark of the alliance between the union and the U.S. Catholic Church. 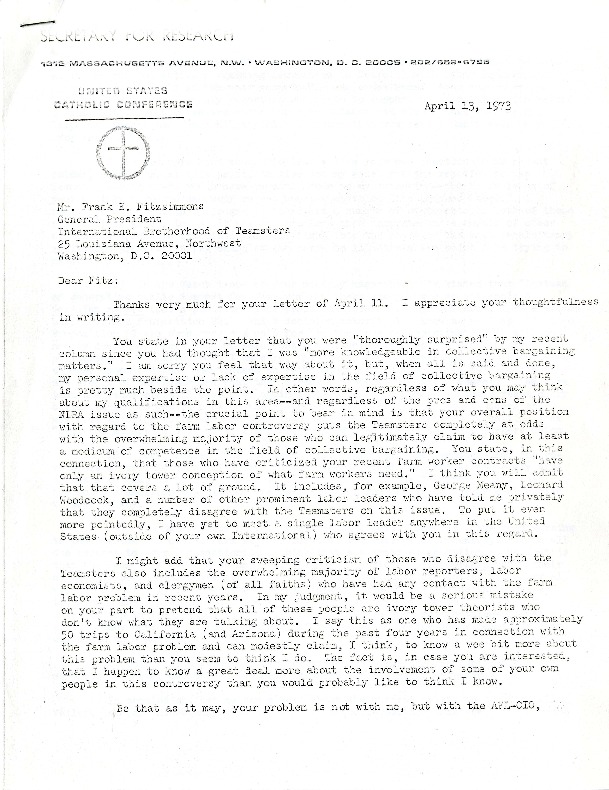 Higgins to Fitzsimmons
Courtesy of ACUA

1. How would farmworkers benefit from an affiliation with the Teamsters?

2. What did Fitzsimmons mean when says that Higgins and other critics “have only an ivory tower conception of what farmworkers need”?

3. How does Higgins respond to Fitzsimmons?

4. How does Higgins’ experiences as an academic and one who has interacted with those in California inform his opinion?

← Letter from Chavez to Higgins