American Catholic History Classroom > Exhibits > Higgins and Chavez: The UFW and the Church > Documents > "The Grape Boycott and the Right to Organize"

"The Grape Boycott and the Right to Organize" 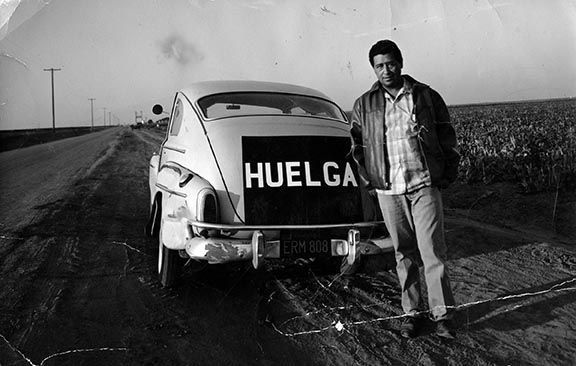 Several clergy were desirous to see the National Conference of Catholic Bishops (NCCB) endorse the Delano boycott, one of whom was Monsignor George G. Higgins. A strong supporter of the United Farm Workers and the laborers it represented, Higgins often took up their mantle in his Catholic News Service syndicated column, The Yardstick.

He would do so once again in early January 1969, when he addressed the continuing grape boycott and unionization efforts, a topic he wrote that he decided to undertake due to two recent developments. The first was the NCCB’s lack of commitment to the boycott at their meeting in late 1968, where they issued their Statement on Farm Labor (click here to see more about this statement). Higgins said recent attempts to frame the NCCB’s lack of action as “an indication that the bishops regard the boycott as being unethical …. isn’t true at all.” He argues that it was not even addressed, so they neither opposed nor supported it, though he firmly came out in support by referring to Monsignor John A. Ryan’s writings of 1910 that “took the position that a boycott is legitimate ‘when the injustice inflicted by the employer is grave, and when no milder method will be effective.’” 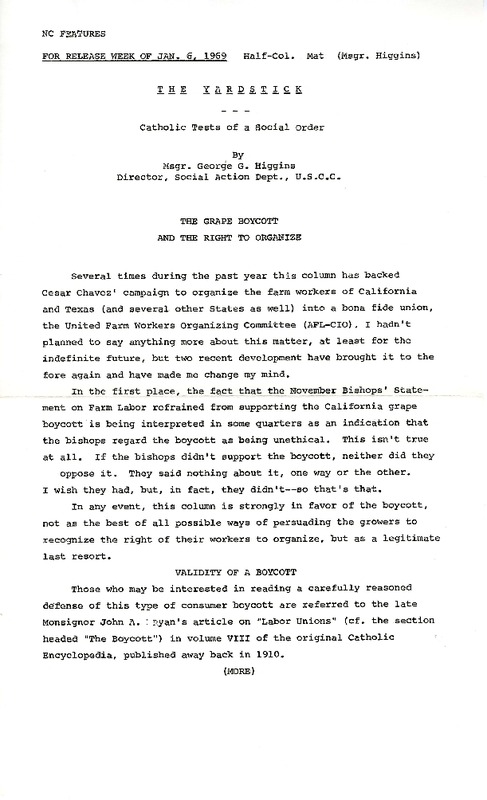 "The Grape Boycott and the Right to Organize"
Courtesy of ACUA

The second development came from a series of articles published by the Catholic weekly Twin Circle that strongly opposed the work of Chavez and the UFW, and that, in Higgins words, included “repeated attempts to undermine Chavez’ reputation  and to cast doubt on his personal integrity as a labor leader and Catholic layman.” Higgins castigated the author of the articles for the personal attacks more so than the accusations that the UFW only represented a minority of the farmworkers. “The fact that they do not agree with him on the issues involved in the California grape dispute doesn’t give them the right to impugn his personal motives or to sabotage his personal reputation,” Higgins writes.

Within a year of his writing, Higgins would have an opportunity to put his words into action as a member of the NCCB’s Ad Hoc Committee on Farm Labor by attempting to negotiate settlements between the UFW and growers.

1. Why does Higgins endorse the boycott?

2. What source does Higgins used to support his position?

3. Why would Higgins so strongly defend Chavez’ reputation and integrity?

Letter from Chavez to Higgins →