American Catholic History Classroom > Exhibits > Higgins and Chavez: The UFW and the Church > Documents > Letter from Chavez to Higgins

Letter from Chavez to Higgins 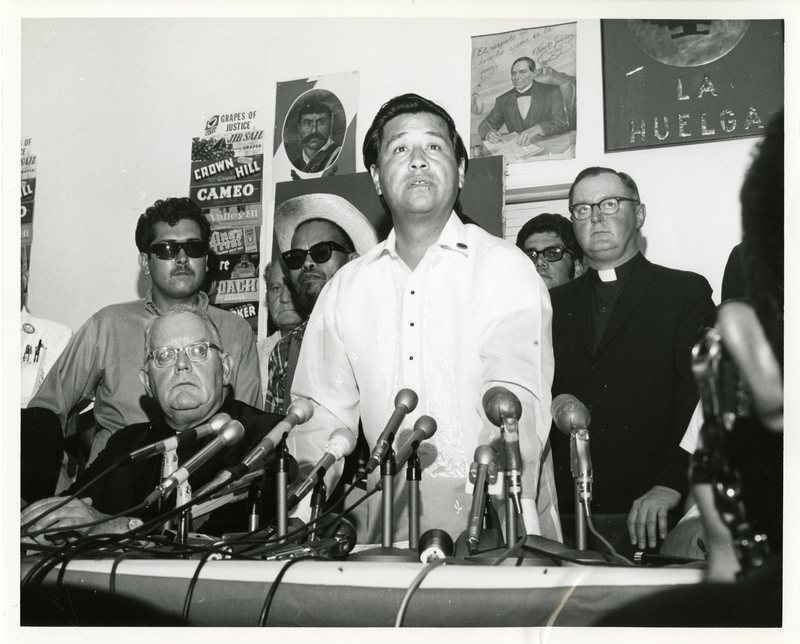 Cesar Chavez at a press conference in 1970. Monsignor George G. Higgins stands to his left while Bishop Joseph Donnelly is seated on his right.

While the UFW made gains in 1970 by agreeing in contracts with numerous grape growers and thus ending the boycott, the union faced other difficulties soon after in the form of lettuce workers. The Teamsters Union, which had agreed to not attempt to organize the farmworkers, broke their agreement with the UFW in 1970 and began offering sweetheart contracts to growers to become the official negotiating union between the lettuce growers and workers.

The UFW thus found itself in another battle right after a victory, this time with growers and a rival union. The union would institute another boycott, this time of lettuce growers, which would lead to officials as high up as the Nixon administration to try to break the boycott. However, the UFW would have to contend with another issue in 1972, when the legislature in Chavez’ home state of Arizona passed a bill, which was soon signed by Gov. Jack Williams, to prohibit strikes and boycotts. Chavez traveled to Phoenix to protest the law, wherein he embarked on the second major fast of his career, lasting for 24 days in May and June. During this time, numerous people came from out-of-state to join UFW members and others in protesting the law. At the same time, Chavez and fellow union worker Dolores Huerta came up with the slogan “Si, se puede (Yes, it can be done)” to counteract claims from some supporters that no change was possible. 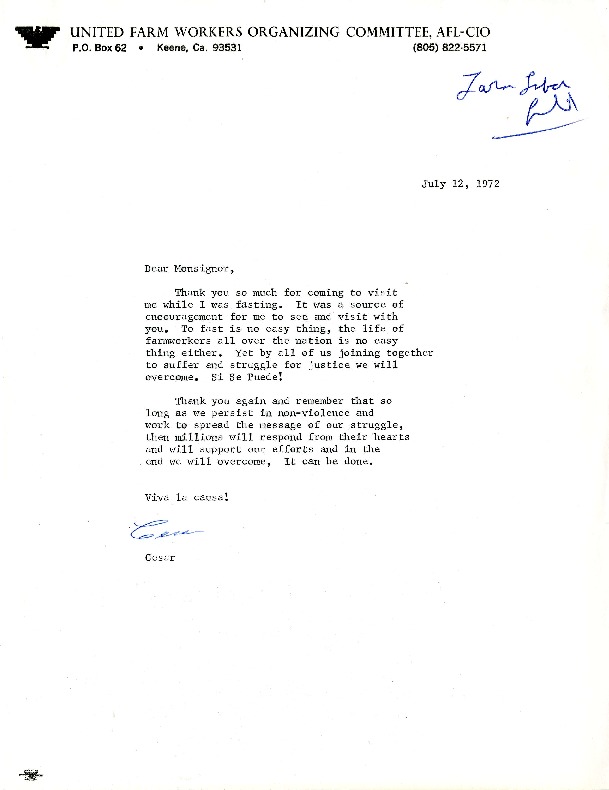 Chavez to Higgins
Courtesy of ACUA

Chavez ended his fast June 4, and though the law would stay in effect, national attention had been focused again on the plight of farmworkers. In the letter presented here, Chavez thanks Monsignor George Higgins for visiting him during his fast. Though acknowledging his actions and the plight of the farmworker were not easy, he wrote that “by all of us joining together to suffer and struggle for justice we will overcome. Si se puede!” While it would take several more years of struggle, Chavez would eventually be proved at least partially correct.

1. What is the symbolism behind a fast?

2. How is fasting a form of protest?

3. How does Chavez draw upon language of the Civil Rights Movement?

← "The Grape Boycott and the Right to Organize"
Next Page: