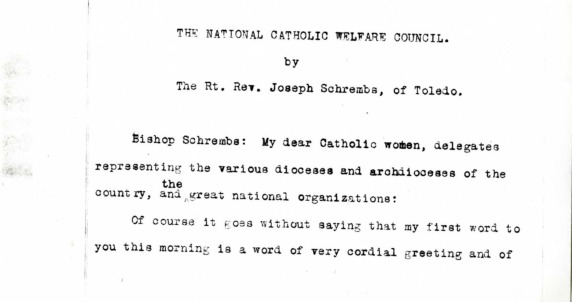 Records of the National Council of Catholic Women, Box 31, Folder 3

As this document suggests, the war had a transformative effect on American Catholics' sense of community.  The first advisor to the group was Bishop Joseph Schrembs of Toledo, Ohio.  The first assembly of the National Council of Catholic Women took place in Washington, D.C. on March 4, 1920.  All provinces but Santa Fe, New Mexico were represented by forty-four diocesan delegates.  Additionally, fifty-seven women's societies were present as well as nearly seventy unofficial observers.  The official group with voting rights totaled 122 women.  The group was skewed toward middle and upper class married women from the Northeast U.S., where most Catholics in general were concentrated.  Bishop Schrembs delivered this speech to the assembled group.

Read the document and consider the following questions:

← World War I- Address by the National Regent of the Daughters of Isabella, 1917 Convention
Next Page: