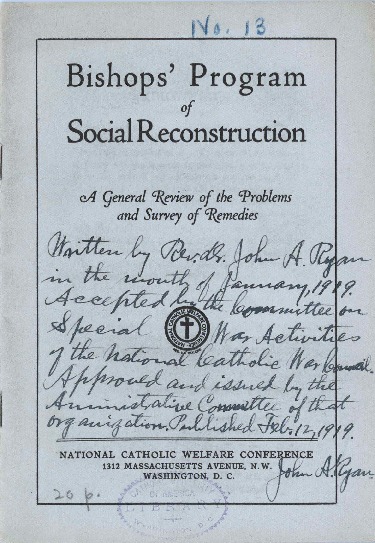 In the late-nineteenth and early-twentieth centuries, the United States experienced economic changes that radically transformed politics and society. In an effort to address the uncertainty caused by these changes, the National Catholic Welfare Council (NCWC) issued the "Bishops' Program of Social Reconstruction," in 1919. The bishops' plan offered a guide for overhauling America's politics, society, and economy based on Pope Leo XIII's Rerum Novarum and a variety of American influences. This website supplies a range of teaching resources related to these influences, the creation of the plan, as well as the opposition it encountered.

Father John A. Ryan, one of the most influential Catholic social reformers of the twentieth century, wrote the Bishops' Program of Social Reconstruction. Combining Progressive thought and Catholic theology, Ryan believed that government intervention was the most effective means of affecting positive change for his church as well as working people and the poor. This section contains letters, speeches, articles, book excerpts and other sources from Ryan's papers, illuminating the thinking that went into the writing of the bishops' plan.

Following national trends toward centralized organization generated by industrialization and accelerated by the exigencies of World War One, the American hierarchy established the National Catholic War Council. Following the war many hoped that a new commitment to social reform would characterize the ensuing peace. The Council saw an opportunity to use its national voice to shape reform and offered its plan for social reconstruction in February, 1919. This section contains letters and other primary sources related to the development of the bishops' plan.

Some Catholic prelates and business groups opposed the bishops' plan on the grounds that it was too radical. William Cardinal O'Connell of Boston, for example, believed some aspects of the plan were "socialistic," a word often used to describe what was viewed as too much government involvement in American society and the economy. Many Americans were inclined to share O'Connell's suspicions; the Red Scare in particular heightened fears of "Bolshevik" plots. As the 1920s progressed, Americans' lost their appetite for Progressive reform, and critics of the Bishops' plan gained traction. This section features documents that detail Ryan's frustration with his lack of progress, and critiques of the bishops' plan. The kind of reformism advised in the Bishops' Program would not find an audience again until the economy slid into the Depression in the 1930s.