A Catholic Response to Industrial and Economic Change 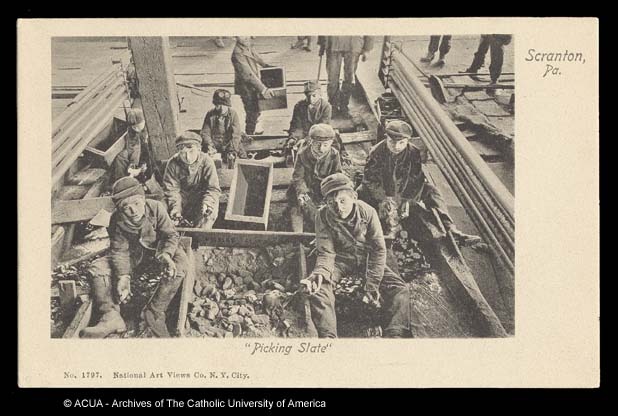 "New developments in industry, new techniques striking out on new paths, changed relations of employer and employee, abounding wealth among a very small number and destitution among the masses, increased self reliance on the part of workers as well as a closer bond of union with one another, and, in addition to all this, a decline of morals have caused conflict to break forth. The momentous nature of the questions involved in this conflict is evident ..."

"The Social Question! what an awful meaning it has for our age! how full is it of possibilities for good or for evil. Happiness or misery as the world has not seen are bound up in its solution. ... the forces of and resources of social injustice are so various and so powerful that if society is to be saved every honest, unselfish heart and head will be necessary. Where should the priest be if not in the midst of this movement, restraining the destructionist, encouraging the true reformer and applying the ethics of the Gospel everywhere?"

At the turn of the century, the United States and much of the western world was caught up in a massive economic revolution that radically transformed politics and society as well. If the world and America were changing, the dimensions of this change, its meaning, and how people and institutions should respond to it were not clear. Some men and women believed the effects of change would, in the end, be beneficial and the changes needed only to work their way out with a minimum of interference. Others believed that institutions must be altered to account for change and the changes themselves altered, limited, channeled, or even stopped and reversed lest they wreak havoc on humans and the fragile societies they had painstakingly created over centuries.

The letters, speeches, articles, book excerpts and other primary sources here document the early career of one man who dedicated his life to responding to this massive change and its effects. His name was John A. Ryan, and like many Americans of his time - though not all - who believed that these changes must be addressed, he thought of himself as a reformer, a Progressive reformer. In many ways he typified this Progressive movement: he backed government intervention in the economy to redress imbalances of power and income like they did; he made his case for reform through journals and magazines; he relied heavily on statistics and the new social science methodologies to build that case; he worked through a variety of reform associations from the National Conference of Charities and Corrections to the National Child Labor Committee. In other ways, however, he was very different from other Progressive reformers of his day. He was a Catholic priest who drew on the Catholic theology of his time, and always saw himself as working on behalf of his church as well as working people and the poor. John Ryan became, perhaps, the most important Catholic social reformer in American history, both in the broad world of reform in America and in the history of Catholic social activism.

Ryan was more than just an exemplar of his age, however. The "lessons" of his life transcend his time. They speak to men or women in any age seeking to apply old principles to new conditions, to find a method, an approach, to mobilize their fellows to respond to changes. The broad questions that Ryan addressed - finding a balance between individualism and community, freedom and equality, liberty and opportunity, labor and capital - are timeless. Indeed, even the more specific debates he became involved in over apparent increasing inequality, conflicting claims for the free market and government intervention, and the rights of workers and the poor, are remarkably similar to the debates of our own day.

← Forging a National Voice
Next Page:

The Bishop's Program for Social Reconstruction →