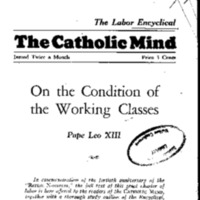 Cardinal Gibbons' success in defending the Knights of Labor from condemnation had repercussions for the working class for years to come. The controversy over the Knights served as part of the impetus behind one of the most influential social encyclicals of the modern era. Issued by Pope Leo XIII in 1891, Rerum Novarum is a clear statement of the Catholic Church's position on the relations between capital and labor in modern society.