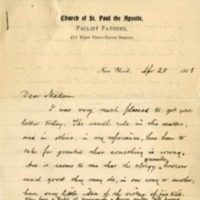 Father George M. Searle, C. S. P. was an accomplished mathematician and astronomer, Professor of Mathematics at The Catholic University of America from 1895-1897, and Superior General of the Paulists from 1904-1910.

I was very much pleased to get your letter today. The usual rule in this matter, and in others, in my experience, has been to take for granted that something is wrong. And it seems to me that the clergy generally, however much good they may do, in one way or another, have very little idea of the outline of justice. They have a habit of pronouncing a person guilty till proved to be innocent.

So to the matter of which you write, I can only say that I have never, in the whole course of my acquaintance with Mrs. Hartwell, either when she was here with us, before going to Baltimore, or after that, when she was Mother Joseph, or since her trouble, in the last year and a half, which now she has spent entirely in this city, seen the slightest sign of any drink on her. Of course I have not been living in the same house, but I have seen her quite a number of times, and had occasion to write frequently; in this last year and a half, I suppose I have received a hundred letters, a good many of them written promptly in reply to some one of mine. And every letter has been written with perfect sobriety, and with a strength of mind and of Christian principle which has amazed me. I have never found any one who endured such severe trouble, and what seems to me such intolerable injustice, with anything like so much virtue. Any one in the slightest degree under the influence of drink would certainly, in my judgement, have shown it in some way. Prudence sufficient to conceal it is of course conceivable, but I have never seen it in the course of a very long experience, in any one addicted to drink. I do not think there is the slightest probability of her misusing any assistance given to her.

What she wants is employment. She has lots of capacity for work in such lines as she has been in, but she has no knowledge of such things as stenography, type-writing, dress-making, &c, which would give her a chance to compete with other. ....

.... And those sisters in Baltimore have, or rather their superior has, if I am not mistaken, been not only retaining her property, but trying to prevent her obtaining work.

My own belief is that she has been the victim of a cabal, due to the ambition of this present superior of who has outed her, and to the help which this superior has had from the priest who has directed the community.

I endeavored, a year ago, to obtain some information from His Eminence as to what charges were made against Mother Joseph, explaining to him that my relation to her as having received her into the Church made it really necessary that I should know the truth. He made no charge of any consequence, but asked me to write to this priest, Father Tarro, which I did, letting the latter understand, to the best of my remembrance, fully, that I was doing so with the Cardinal's authority. Fr. Tarro replied with what was obviously a lie (except in a merely literal sense), namely, that she had left of her own accord. The view that have tried to put forward was that she resigned entirely in dudgeon at not being re-elected Superior. I think she made an immense mistake in resigning her membership in the community; she should have insisted on information as to the charges against her. Such information has been entirely withheld, and 'obedience' put on the sisters not to communicate with her.

It might have been well for me to press the matter further with Tarro, or to inform the Cardinal of his way of treating my letter, but I did not, and really do not now, believe that it would have been of any use, and of course I had no actual right to come in as a judge in the matter.

Of course I may be mistaken in my view of the case, but I have the English and American way of presuming innocence till guilt is proved, and no proof of guilt has been offered to me, not have I seen any evidence of it, by my own observation.

I do not want or mean to blame His Eminence in the matter; of course he may be in possession of some facts which he does not choose to communicate. It seems to me, however, that he has left the matter in Fr. Tarro's hands.

Mrs. Hartwell's conduct does not seem to me that of a person who is aware of charges made against her, and of their truth, and if she is not so aware, it does not seem to me that she has been treated with justice; but even if she has, I think you are quite right in feeling that charity should be shown her, and that she should be helped to obtain a living, and not prevented from doing so. And as I have said, I am not aware of anything in my experience with her to draw that such charity, given directly to herself, will be misplaced. ...."