Catholic Civil Rights Association of Oregon, "Twenty-Four Reasons That You Should Vote Official Ballot 315,"No"," 1922 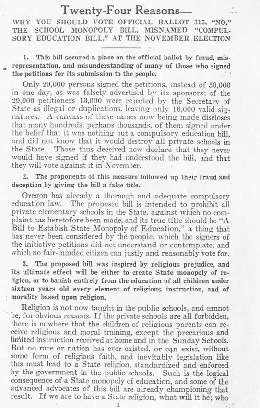 Twenty-Four Reasons is a pamphlet prepared by Dudley Wooten and the Catholic Civil Rights Association of Oregon. More than 500,000 copies of this pamphlet circulated in Oregon before the school bill vote. Below is an excerpt with five of the reasons given in the pamphlet to vote against the bill. Unlike some more narrowly focused writings, the audience of this pamphlet included both Catholics and non-Catholics.