American Catholic History Classroom > Exhibits > The Journal of Sister Justina and the Santa Maria Institute > Sister Blandina Segale, "At the End of the Santa Fe Trail"

Sister Blandina Segale, "At the End of the Santa Fe Trail" 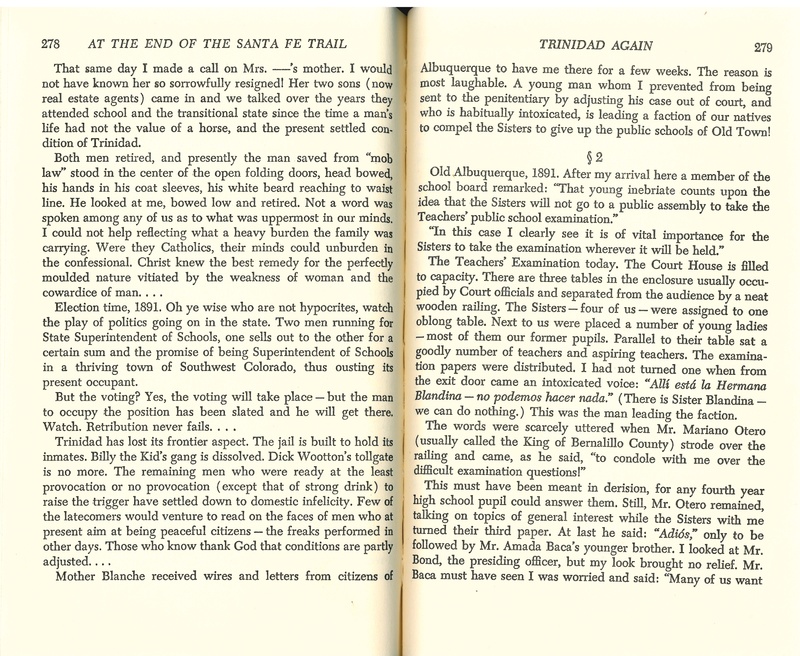 From 1897 to 1929, Sister Justina Segale, a Cincinnati Sister of Charity, kept a journal of the activities of the Santa Maria Institute, a Catholic settlement she founded with her biological and religious sister, Blandina Segale.  For thirty years prior, the Sisters had been teachers and missionaries in the American Southwest, although they did not work together.  Sister Blandina kept a journal of her adventures during those years for Sister Justina.  This passage concludes the published version of the journal.  It highlights the anti-Catholic prejudice the Sisters faced from Anglo settlers and documents Blandina’s view of what sisters had contributed to the region.  In her dispute with the Trinidad, Colorado, public school board she forcefully articulated her right to express her religious faith. Sisters Blandina and Justina would adopt a similar position regarding Italian immigrants’ claim on American citizenship during World War I.

Trinidad [Colorado] has lost its frontier aspect.  The jail is built to hold its inmates.  Billy the Kid’s gang is dissolved.  Dick Wooten’s tollgate is not more.  The remaining men who were ready at the least provocation or no provocation (except that of strong drink) to raise the trigger have settled down to domestic infelicity.  Few of the latecomers would venture to read on the faces of men who at present aim at being peaceful citizens—the freaks performed in other days.  Those who know that God that conditions are partially adjusted. . . . . [ellipses in original]

Mother Blanche [Davis, Cincinnati Sisters of Charity] received wires and letters from citizens of Albuquerque to have me there for a few weeks.  The reason is most laughable.  A young man whom I prevented from being sent to the penitentiary by adjusting his case out of court, and who is habitually intoxicated, is leading a faction of our natives to compel the Sisters to give up the public schools of Old Town!

Old Albuquerque, 1891. After my arrival here a member of the school board remarked: “That young inebriate counts upon the idea that the Sisters will not go into a public assembly to take the Teachers’ public school examination.”

“In this case I clearly see it is of vital importance for the Sisters to take the examinations wherever it will be held.”

The Teachers’ Examination today. The Court House is filled to capacity.  There are three tables in the enclosure usually occupied by Court Officials and separated from the audience by a neat wooden railing. The Sisters—four of us—were assigned to one oblong table. Next to us were placed a number of young ladies—most of them our former pupils.  Parallel to their table sat a goodly number of teachers and aspiring teachers.  The examination papers were distributed. I had not turned one when from the exit door came an intoxicated voice: “Alli esta la Hermana Blandina—no podemos hacer nana.” (There is Sister Blandina, we can do nothing). This was the man leading the faction.

The words were scarcely uttered when Mr. Mariano Otero (usually called the King of Bernalillo county) strode over the railing and came, as he said, to “condole me over the difficulty examination questions!”

This must have been meant in derision, for any fourth year high school pupil could answer them.  Still, Mr. Otero remained, talking on topics of general interest while the Sisters with me turned their third paper.  At last he said: “Adios,” only to be followed by Mr. Amada Baca’s younger brother.  I looked at Mr. Bond, the presiding officer, but my look brought no relief. Mr. Baca must have seen I was worried and said: “Many of us want to see you when this thing is over.”  With those words he lift me.

But, though annoyed, I was not prevented from seeing several humorous byplays at the table of teachers and would-be teachers.  One gray haired old gentleman who had been teaching in a country school for thirty years looked at his first paper, rumpled it and put it in his pocket. The second and third met the same fate. The presiding spirit went to him and said: “Those questions when answered, must be left face downward.”

The old gentleman’s dignity was much perturbed—he got up and left.

One young man—recently from somewhere—drew his pencil through most of the questions—turned the papers face downward and made his exit.  One of the young ladies next to our table leaned over to ask a question. The Sister nearest to her said: “This is not a schoolroom, but an individual examination.”

All this I noticed while the two gentlemen took my time from my examination papers, but the instant Mr. Baca left I went to Mr. Bond and asked him to prevent anyone from interrupting me—which he did.

You must take into account, Sister Justina, that this is the first Teachers’ Public Examination ever held in this territory. This covers all territory, but does not hide from me the fact that before long all school funds will be diverted into channels dug out by politicians. The only available public school funds for nuns will be the country schools were politicians will not find persons to teach except the “Benighted Catholics.”

A few days after the examinations, Mr. Bond and the other members of the examination board came to the convent in a body to present our certificates, saying: “We want the pleasure of personally handing you the first four Number One teachers’ certificates issued in Albuquerque under the new school law.”

The one small faction of the inebriate having naturally died, I returned to Trinidad to find Mr. Butler—the School Superintendent—buried, and a new occupant in his place.

The intent of the meeting was to notify me that “under no circumstances does the school board want to lose your services, but we ask you to change your mode of dress.”

I looked steadily at the Chairman and replied: “The Constitution of the United States gives me the same privilege to wear this mode of dress as it gives you to wear your trousers. Good-bye. . . . .” [ellipses in the original]

So this is the end of twenty-two years’ work in Public School Number One, opened in 1870 when Trinidad was mostly governed by the best shotmen and sheriff’s lead, mobs to hang murderers, and jail birds never come to trial, and the life of a man was considered a trifle compared to the possession of a horse.  Jesuits and Sisters used every effort to quell the daily storms—while School Room in School Number One exerted an influence over the pupils— grown men and women—attending Room Number One that often astonished its teacher.

Money considerations never entered the mind of her who had early in life evaluated money and eternity. We supplied the school building, janitor, and made repairs, and daily from the one story adobe building went forth cleaned hearts that had entered with murderous thoughts and designs; hearts filled to overflowing with the desire to get rich quick; hearts whose morality was fit companion for the beasts of the plains; and these spasmodically agitated hearts were quelled to calmness by her whose sole thought was peace—the pat the Heaven. . . . . .” [ellipses in the original)

Within the same week I received the letter that follows:

I am requested by the School Board—as Secretary of the Board—to notify you and Sister Rose Alexius that your applications as teachers in the public schools of Trinidad, Colorado, for the coming year can only be accepted upon the conditions that you shall lay aside your dress of black, peculiar to your church and office, and be willing to comply with all the rules of the Board and Superintendent—the same as is required of other teachers in the Trinidad Schools.

Per E. Brigham, Secy. P.S. Sister Blandina, you understand full well that your qualifications as a teacher are not questioned, also those of Sister Alexius are very satisfactory. But you understand full well our position and that anything in a public school that savors of sectarianism brings us into trouble and is directly in opposition to all our school laws, and the duties required of Schools Directors, hence there is but one course of action, and that must be in the line of our duty and you can but say that we are justified in this matter.

On receipt of this letter I wrote Mother Mary Blanche, telling her of meeting the School Board and the result of the meeting.  No comments from that Great Heart except: “You foresaw this. God ever bless you. Saint Patrick’s School, Pueblo, Colorado, needs a principal—fill the vacancy.”

When I told Father Personé, S. J., the pastor of Holy Trinity parish of my being sent to Pueblo, he said: “Please, Sister, not until you have made a survey of every Mexican family who has children of school age. Register the names and hand the list to me. This will be your last act of love to our native population.”

This was done in order to secure the attendance of our native children in the parish school which will open in September.

Adios, Trinidad, of heart-pains and consolations.

← From the Constitutions of the Sisters of Charity of Cincinnati, 1853
Next Page: